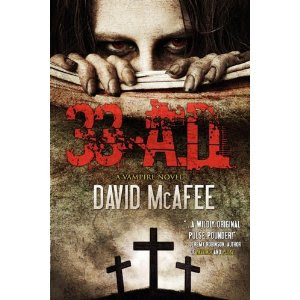 I will be posting a series of interviews from fellow authors that I've met over at Kindleboards. First up is David McAfee. His book is 33A.D.

1. Briefly describe your journey in writing your first book.

Actually, 33 A.D. was the second novel I wrote. The first novel, SAYING GOODBYE TO THE SUN, will be released as a Kindle book next week. But for 33 A.D. the journey went something like this: I had a great idea. I wrote a book based on the idea. I pitched it unsuccessfully for two years before a small UK press picked it up. After realizing the UK press was never going to pay me, I broke off from them and went out on my own. It hasn’t always been fun, but it was never boring. Through it all, I always believed there was a market for my book. I’m still hoping the readers prove me right.

2. Did you query agents or traditional publishers before publishing on Amazon?

Heh. Guess I jumped the gun on my answer to Question 1. Yes, I did. I actually had an agent at one time, but she was not able to sell the book. She only tried six publishers, though. I can’t help but think she would have been able to sell it if she’d been more committed. Or maybe I just got on her nerves. I hear I do that sometimes.

3. What factors influenced your decision to self-publish?

Like I said above, I always believed there was a market for my book. I mean, come on…a book about a vampire in Biblical Jerusalem who tries to kill Jesus of Nazareth? Sure, it’s a mish-mosh of genres and can’t be pigeon holed into one demographic, but I always thought that was the beauty of it; that the book would appeal to fans of a myriad of genres from vampire fiction to historical thrillers. Even fans of Christian fiction can find something to like about the book, provided they can be convinced to read it.

4. Will you try to garner a traditional publishing contract for any future books?

Sure. In fact, there is a NYC agent looking at it right now. Doesn’t mean he’ll offer to represent it, but I’m keeping my fingers crossed. NYC publishing has a wide reach and lots of money for marketing, it would be silly to eschew it altogether because they hurt my feelings or something. Besides, their editors know their stuff. Any chance to gain readers and improve my writing at the same time is one I am going to take.

5. Did you design your cover art? If not, would you care to share your graphic designer’s information?

I didn’t. I had an entirely different design in mind for the cover. I knew nothing about graphic programs like Photoshop, though, so I hired the cover out. The guy I hired had read the book, as well, and he had his own ideas about how the cover should look. He sent me a rough image, and I fell in love with it.

6. If you used a graphic designer, how involved were you during the creative process for your cover?

Not that much, actually. I made a few suggestions on text and the image itself, but for the most part it was all him. The red eyes were my idea, as were the long, dirty fingernails. And of course the back cover copy on the print version of the book.

7. How did you feel when you got your first sale? Are you pleased with sales so far?

I felt great when I got my first sale. What? You mean someone actually PAID to read my work? Really? That's a nice high.

So far I'm very pleased with my sales. For an indie author with no marketing budget, I think I'm doing well. I do hope they increase, of course. What author doesn't? But right now I really can't complain.

8. What kinds of social media [twitter, facebook, webpage, blog, writing forums] are you involved with trying to garner attention for your book(s)?

I’m on Twitter as DavidLMcAfee, Facebook as David McAfee, and I have a MySpace account that I never use. I’m also pretty active on www.kindleboards.com, and a frequent visitor to www.absolutewrite.com. I also have a blog, mcafeeland.wordpress.com, and soon I’ll have a website, too. I’ve registered the domain name as www.mcafeeland.com. I just joined Yahoo forums, too, but I haven’t figured out how to use them yet.

9. Besides Amazon, are there any other sites where your books are for sale?

Tons. So many that I can’t name them all. The print version is available for sale anywhere that uses Ingram, including Powell’s books, Barnes and Noble, And some others I never heard of, like FlipKart. FlipKart? What the heck is that?

The eBook is available on Amazon Kindle, Barnes & Noble.com, and Smashwords.com.

My next release will be the Kindle version of SAYING GOODBYE TO THE SUN, a vampire suspense/romance novel that’s not quite as gritty as 33 A.D. Once that’s out I’ll begin the final edit of my next Kindle release, a pulp horror novella title GRUBS. Think along the lines of those old B-Movies or classic pulp books like NIGHT OF THE CRABS or THE RATS. I hope to have GRUBS up and running as a Kindle book by the end of June. Because it’s so short (45K) I also plan to include every short story I’ve ever written. Hopefully people like them. Some are pretty gross.

Once those three books are out on Kindle, I will dive into the rough draft of my recently completed novel THE GALLOWS TREE. It’s about a small town in Tennessee that is haunted by the spirit of a young black boy who was lynched there in 1959. Not a vampire anywhere in it. I’m not sure if I will Kindle that one or try to interest an agent in it. I suppose it depends on how well the other three books are doing.

I also have a manuscript half completed for a book called BAIT. Another vampire book about a junkie who hunts vampires in a very unusual way. I hope to have it done by December.

After that? Who knows. I have about a dozen novel ideas jotted down, including a sequel and a prequel to 33 A.D. Actually, all the vampire novels tie in to each other as part of one big story, so in a sense they are all sequels or prequels. The other horror novels are all stand alone books. I just need to pick one and start working on it.