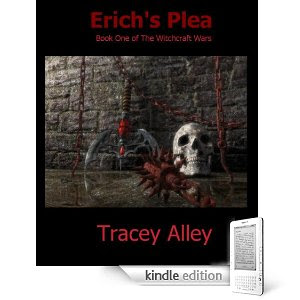 Briefly describe your journey in writing your first book.

The first book I ever wrote was absolute rubbish, but I learned a great deal from that experience and quite a few subsequent other books. My first published book ‘Erich’s Plea: Book One of the Witchcraft Wars’ was a very long process. The story initially came out of a role playing game I had played with some friends; they and I enjoyed the story so much it was suggested I turn it into a book. Of course it’s grown far and beyond the original game that was played in order to become a novel. Still I found that the storyline was so familiar to me that the actual writing of the book was, and has been – as I work on the two sequels – a very easy process.
Did you query agents or traditional publishers before publishing on Amazon?
I initially went the ‘traditional’ route with ‘Erich’s Plea’, sending it to agents and publishers and received a great deal of very positive feedback, but no contracts. Traditional publishers rarely take on new authors preferring to invest their money in established names that they know they will be able to make money on.
What factors influenced your decision to self-publish?
I received a very positive response from an agent at a traditional publishing house but as it didn’t wind up in a contract I decided if the work was good enough to get that close to a contract then it was good enough to be published even if I had to do it myself. I also had a lot of great reviews from beta-readers and felt confident myself in the quality of the work. I would never have self-published if I had not truly believed in the work I had to offer.
Will you try to garner a traditional publishing contract for any future books?
At this stage no, but I will revisit the question when the trilogy has been finalized. Although I have to confess that I love the amount of control an author has when self-publishing.
Did you design your cover art? If not, would you care to share your graphic designer’s information?
The cover art is used with permission from a graphic designer whose website ‘Feebleminds’ offers some wonderful artwork royalty free. Since that time however I have started working with a new artist.
If you used a graphic designer, how involved were you during the creative process for your cover?
As I chose a piece of work from a free website I had no creative input into the design. This is the primary reason I have found a local artist who will be working with me on all future projects; his artistic skills blend extremely well with my vision for the books and I will have much more input in any future designs.
How did you feel when you got your first sale? Are you pleased with sales so far?
My very first sale was actually a friend of mine, but that said I’ve had other sales since then and I’m absolutely elated. Given that I am a completely unknown writer I would have to say that I’m very pleased with the sales to date.
What kinds of social media [twitter, facebook, webpage, blog, writing forums] are you involved with trying to garner attention for your book(s)?
I am currently using both Twitter and Facebook and will very soon have a website finished. I haven’t yet considered a blog of my own but I’m fairly involved in Kindle Boards forums, which I find very satisfying and also very inspiring.
Besides Amazon, are there any other sites where your books are for sale?
Yes my work is also available through Smashwords and very soon will be available Print on Demand through Amazon.
What’s next for you?
I actually have two projects in the pipeline ready to go when I’ve finished the Witchcraft Wars trilogy. One is another series of fantasy novels in the same Kaynos setting used in the Witchcraft Wars. The other is a non-fiction project I’ve been working on intermittently for some time on the history and development of religion, primarily Christianity, but it encompasses all forms of organized religion.
Posted by Debra L Martin at 8:00 AM