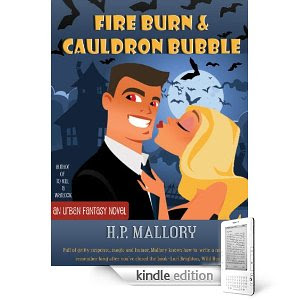 A warm welcome to H.P. Mallory!

Briefly describe your journey in writing your first book.
I was living in Cambridge, England two years ago and I’d discovered the works of Laurel K. Hamilton and Charlaine Harris. After falling in love with my series, I was overcome with the need to try my hand out at my own version of an urban fantasy/ paranormal romance and Fire Burn and Cauldron Bubble was born.
Did you query agents or traditional publishers before publishing on Amazon?
Yes, I sent many queries out and received a great response. I ended up signing with my dream NY agent…more to come on that in the next  question.
What factors influenced your decision to self-publish?
So, after landing the perfect agent and thinking I was on the road to publishing fame and glory, the economy tanked and my agent went MIA (not literally but as far as my career goes).
After that bad taste in my mouth, I decided to take the bull by the horns and self publish. And I’m thrilled I did. I’ve been really excited about the response to my books and I wish I’d done this earlier. I love the idea that I’m ultimately responsible for the success or failure of my career.
Will you try to garner a traditional publishing contract for any future books?
I wouldn’t be opposed to it. If I can prove myself through the ebook market, I’d be open to a hard copy version. I’m not sure about the whole agent route again though.
Did you design your cover art?  If not, would you care to share your graphic designer’s information?
I did do all the design of the covers though I didn’t create the art. I was able to find the drawings and then I altered them in photoshop.
How did you feel when you got your first sale?  Are you pleased with sales so far?
I was thrilled! It was a really exciting moment. And I’m really pleased with my sales so far. They just keep getting better and better. I’m especially elated when I read good reviews from people. It’s just a cool feeling to think—“wow, they’re talking about my book!”
What kinds of social media [twitter, facebook, webpage, blog, writing forums] are you involved with trying to garner attention for your book(s)?
I am pretty much everywhere on the web. I have my own website, blog, Twitter account, Facebook and My Space page. Here is that info if anyone is interested:
www.urbanfantasynovels.com. H.P. Mallory Website
www.urbanfantasyauthor.blogspot.com, H.P. Mallory Blog
www.myspace.com/hpmallory:, H.P. Mallory My Space Page,
http://twitter.com/hpmallory, H.P. Mallory Twitter Page,
http://www.facebook.com/people/Hp-Mallory/10000124964376, H.P. Mallory Facebook Page
Besides Amazon, are there any other sites where your books are for sale?
Yes, they are available at smashwords: http://www.smashwords.com/profile/view/hpmallory
If anyone is interested, here is a quick summary of each book:
Fire Burn and Cauldron Bubble:
A self-deprecating witch with the unique ability to reanimate the dead. A dangerously handsome warlock torn between being her boss and her would-be lover. A six hundred year old English vampire with his own agenda; one that includes an appetite for witches. The Underworld in a state of chaos. Let the games begin.
Life isn’t bad for psychic Jolie Wilkins. True, she doesn’t have a love life to speak of, but she has a cute house in the suburbs of Los Angeles, a cat and a quirky best friend.
Enter Rand Balfour, a sinfully attractive warlock who insists she’s a witch and who just might turn her life upside down. Rand hires her to help him solve a mystery regarding the death of his client who also happens to be a ghost. Jolie not only uncovers the cause of the ghost’s demise but, in the process, she brings him back to life!
Word of Jolie’s incredible ability to bring back the dead spreads like wildfire, putting her at the top of the Underworld’s most wanted list. Consequently, she finds herself at the center of a custody battle between a villainous witch, a dangerous but oh-so-sexy vampire, and her warlock boss, Rand.
To Kill A Warlock:
The murder of a dark arts warlock. A shape-shifting, ravenous creature on the loose. A devilishly handsome stranger sent to investigate. Sometimes working law enforcement for the Netherworld is a real bitch.
Dulcie O’Neil is a fairy. And not the type to frolic in gardens. She’s a Regulator—a law-enforcement agent who monitors the creatures of the Netherworld to keep them from wreaking havoc in the mortal world.
When a warlock is murdered and Dulcie was the last person to see him alive, she must uncover the truth before she’s either deported back to the Netherworld, or she becomes the next victim.
Enter Knight Vander, a sinfully attractive investigator sent from the Netherworld to work the case with Dulcie. Between battling her attraction to her self-appointed partner, keeping a sadomasochistic demon in check, and fending off the advances of a sexy and powerful vampire, Dulcie’s got her hands full. As the body count increases, Dulcie finds herself battling dark magic, reconnoitering in S&M clubs and suffering the greatest of all betrayals.
What’s next for you?
Well, I’m in the process of finishing my third urban fantasy book at the same time that I’m working on the two sequels for Fire Burn and Cauldron Bubble and To Kill A Warlock.
Here are the Amazon links for each:
Fire Burn and Cauldron Bubble: https://www.amazon.com/dp/B003UNL8OG
To Kill A Warlock: https://www.amazon.com/dp/B003UNLIOQ
Posted by Debra L Martin at 7:00 AM