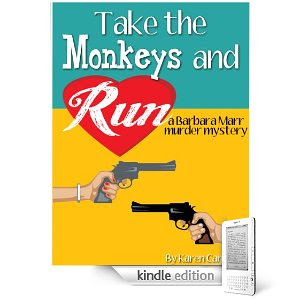 I pleased to welcome Karen Cantwell to the blog.

Briefly describe your journey in writing your first book.
I had written many short stories and a few one-act plays, but I had really always wanted to write a novel.  That was my dream, but it was also much harder for me.  I could start novels, but never seemed to finish them.  Then I read Janet Evanovich’s How I Write.  Somehow, she spelled it out for me: how to finish a book.  I sat down after reading that book and said, “I’m going to finish a book.”  That was my only goal.  I took this idea I had about some monkeys and a vacant house and a snoopy soccer mom, decided how the story would end, then wrote toward that end.  Voila!  I finished a book.  I broke open a bottle of champagne that night. Now that was just a first draft – it has been through several more drafts and rewrites, but finishing was the key!
Did you query agents or traditional publishers before publishing on Amazon?
Does a bear do his business in the woods?  Yup. I played the please-reject-me game.  And I won EVERY time!
What factors influenced your decision to self-publish?
It was really just one factor:  I wanted to move forward.  The act of querying agents and publishers is a long, long road of waiting and getting no where.  While you’re doing that, it’s hard to keep moving forward.  At least it was for me.  I had started a second in the Barbara Marr series, but felt suppressed by the fact that I hadn’t sold the first one.  Now that I’m selling the first book to readers, I have a reason to finish that second one.  It’s very liberating.
Will you try to garner a traditional publishing contract for any future books?
Truthfully, I just don’t know.  I’m certainly not going to work at it nearly as hard as I had been before.  For me now, I’m going to be focused on finding readers for the first book and keeping them entertained by writing more books.  After I’ve become very good at that, I’ll see what new road I might try.
Did you design your cover art?  If not, would you care to share your graphic designer’s information?
I’m not a visual artist!  Yikes.  No, I hired a woman who generally designs blogs.  She designed my blog, Fiction For Dessert and I was so happy with her work and her professionalism that I asked her to do the book cover.  And I couldn’t be happier with it!  Her website is:  www.seemydesignsbyshauna.com
If you used a graphic designer, how involved were you during the creative process for your cover?
I was very involved.  I gave her the “feel” I wanted for the cover, what sorts of visual images I’d like to see, then we went through several designs before coming to the final product.
How did you feel when you got your first sale?  Are you pleased with sales so far?
I was my first sale!  And that was fun, but I was VERY excited by my second sale!  And the third and the fourth . . . every time I sell a book, it’s like the first time.  Too fun.  And I am SO pleased with my sales so far.  A woman asked me the other day if I wasn’t concerned that readers didn’t have e-readers would be able to buy my book, and my answer to her was, “I didn’t have readers BEFORE!”  My book was sitting in a drawer collecting dust and agent rejections.  At least I have more readers now than I had last month when I wasn’t doing this.  And hopefully it’s a book that’s entertaining those readers.
What kinds of social media [twitter, facebook, webpage, blog, writing forums] are you involved with trying to garner attention for your book(s)?
I’m using all of those as well as researching other ways to reach readers.  It’s time consuming, but interesting.  One thing I’d really like to do is figure out how to better utilize my book video.  I have received a lot of favorable comments on the video and I think it would be a great promotional tool if I can just figure out how to get it out there.
Besides Amazon, are there any other sites where your books are for sale?
I also just made it available in the iBookstore for iPad.  Hopefully after that, B&N for the Nook.
What’s next for you?
Right now I’m finishing up a collection of Barbara Marr short stories which I will be selling on Kindle as soon as it is done.  The first story in that collection is already available on my website. (www.karencantwell.com).  Then I will be completing the second Barbara Marr novel, Citizen Insane and starting the third, Silenced by the Yams.  I have also started a stand alone somewhat paranormal mystery titled Blurred Visions about a female eye doctor who can “see” the future.  Holy cow!  That’s a lot of writing – guess I’d better get to work, huh?
Posted by Debra L Martin at 7:30 AM