Today's Sponsor: CRAZY FOR YOU by Sandra Edwards 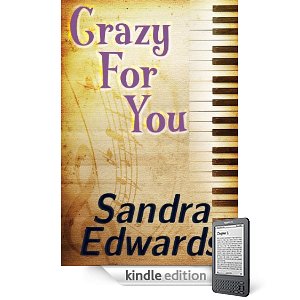 Book Blurb:
Crazy For You is a rags-to-riches tale set against the backdrop of the 80s, movie stars and rock-n-roll.
Roxanne Simon is a successful author and an award-winning actress who’s also a bit neurotic. After she appears on a popular talk show the world is left guessing: is rock star Frank Garrett the father of her four year old son?
Once Frank learns the true parentage of Roxanne's son, he's determined to make her pay. When he stumbles upon her weakness, he decides to use it against her. But is he prepared to see her pay the ultimate price in his quest for revenge?
Be careful what you wish for...you just might get it.
Review Snippets:
From The Crazy Bookworm ~ “The entire character cast is great, you'll find yourself falling in love with not just Roxanne and Frank but with all the characters.”
From Readers Favorite Book Reviews ~ “Ms. Edwards takes the reader back to the 1980's, to a world of starving musicians, sex and drugs. She portrays the scene quite well.”
Buy Links:
Kindle Store: http://www.amazon.com/dp/B003WJRJ4Q
Amazon Print: http://www.amazon.com/Crazy-You-Sandra-Edwards/dp/1453787771
Smashwords: https://www.smashwords.com/books/view/19507

Author bio: Sandra is an award-winning author with eclectic tastes. She writes in a variety of genres such as paranormal (mostly time travel and reincarnation), contemporary, and suspense. Her books often push the envelope and step outside the boundaries of conventional romance. She lives in the U.S. (west coast) with her husband, two kids, four dogs and one very temperamental feline.
http://www.sandrawrites.com
http://www.facebook.com/SandraEdwards.Author
Crazy for You Excerpt:
That evening, Roxanne sat back and watched Rich and Glen give all the local groupies the cold shoulder. The hometown girls seethed as the two band members, who’d been oh-so-friendly yesterday, entered the club tonight sporting these unknown women on their arms. None of the slighted fans tried to hide their anger.
Roxanne couldn’t understand how Candy and Glenna, especially Glenna, could stand to witness this diversion as it played out between the guys in the band and the local girls. The whole thing proved unsettling for Roxanne. “Let’s go out and burn one.” Her suggestion came abruptly.
“Okay.” Candy popped up from her chair and grabbed her purse.
The girls headed outside, and made themselves comfortable in the back of Roxanne’s van.
Glenna initiated the ritual by pulling a joint out and firing it up. “Did you see all those girls giving me the evil eye when I walked in on Glen’s arm?” she asked with an amusing laugh and passed the joint to Roxanne. Glenna didn’t seem to care, one way or another, about what she obviously knew.
“No shit.” Candy let out a sharp laugh. “I caught a few of those myself.”
Roxanne choked on the smoke and coughed. “I can’t believe you two think that’s funny.” She handed the joint to Candy.
“Roxie…” Glenna said in a discerning tone, “I’m not blind to the fact of what goes on when I’m not around. But I also know…” She gave Roxanne one of those looks that said she wasn’t worried, and in a controlled voice, she said, “when push comes to shove…” She shrugged with a measure of confidence. “I come first.”
“And it doesn’t bother you?” Roxanne asked, doubtful.
Candy passed the joint to Glenna, saying nothing, just following the conversation with an entertaining grin edging up the corners of her mouth.
“Not as long as Glen doesn’t flaunt it in my face,” Glenna said. “You must understand.” She stopped long enough to take a hit off the joint. “The groupies, they got one thing on their minds.” She stopped again, holding her breath this time. An act that allowed the capabilities of the drug to take her away. “They want to screw a musician. Any musician.” Slowly, Glenna blew the smoke out in a long, lingering trail. “They put it right there in their faces. And believe me, a stiff dick has no conscience.” There was no doubt in her tone, no fear in her words. She handed the joint to Roxanne. “And I’m not going to let some little two-bit slut destroy my marriage,” she added, in an almost vindictive tone.
Roxanne toked on the joint and a disturbing thought crossed her mind. Glenna not only knew about it—she accepted her husband’s infidelity. Anxiety colored Roxanne’s thoughts with visions of what Frank might be doing out on the road if she wasn’t there. She tried to expel the ugly thoughts invading her head, right along with the smoke as she exhaled and handed the joint to Candy.
“You got a clip?” Roxanne said to Candy.
“Yeah.” Candy pulled a roach-clip from her purse and clamped it onto the joint.
Glenna picked up on Roxanne’s anxiety. “I’m not saying that’s what Frank would do.” She had to get that notion out of Roxanne’s head. Otherwise, Frank would hit the roof. “So don’t go judging him by my husband’s actions.”
Glenna prayed Roxanne had nothing but pure thoughts of Frank. If not, there would be hell to pay. Frank would see to that.

PAID ADVERTISEMENT
Please support our sponsor:
Posted by Debra L Martin at 7:00 AM