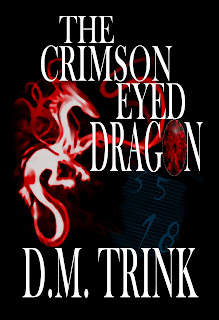 Is it risky to surrender to your curiosity?
What underlying attraction compels Jared to buy the majestic silver dragon, and will it lead him and his friends Griffin, Chase and Amber into inescapable danger?
When he brings home the dragon statue, Jared initiates a chain of events that propels
him and his friends into an incredible adventure solving clue after clue.
Will they be able to decipher the mystery before the lurking danger manifests?
http://www.amazon.com/The-Crimson-Eyed-Dragon-ebook/dp/B004C44GLY
http://www.smashwords.com/books/view/30013
http://search.barnesandnoble.com/The-Crimson-Eyed-Dragon/DM-Trink/e/2940011136252/?itm=1&USRI=the+crimson+eyed+dragon
Review quotes:

5.0 out of 5 stars A totally engaging and suspenseful tale!,
By
Smokey - See all my reviews
Amazon Verified Purchase(What's this?)
This review is from: The Crimson-Eyed Dragon (Kindle Edition)
When I started reading The Crimson Eyed Dragon, I frankly wasn't sure what to expect. However, from almost the beginning the story pulled me in and I could easily picture the capers of these teenagers. I feel that it is so well-written, that readers of almost any age will enjoy this story. The author did a great job of 'tying up' all lose ends and made the reader feel good with all the various twists and turns.

5.0 out of 5 stars Fun little mystery.,
By
Dawn Judd (Kansas) - See all my reviews
This review is from: The Crimson-Eyed Dragon (Kindle Edition)
My first read for 2011. I had the honor of hosting this book for Kindle Kisses a while back, so I thought I better go ahead and read it myself. So glad I did. This was a really fun book. It kind of reminded me of The Hardy Boys or Encyclopedia Brown, with a fun mystery, and a cast of curious young adults. The plot was well thought out and the whole book was entertaining. I think it would be a great book for all ages. I'm interested in seeing if Ms. Trink decides to turn this into a series. I think it would do really well.
5.0 out of 5 stars A 5 Star Book,
By
Jennifer L. - This review is from: The Crimson-Eyed Dragon (Kindle Edition)
I found this book on my Kindle. Which I love...I also loved this book. It reminded me of the movie "The Goonies". All I can say is move over Goonies!! Here comes "The Crimson-Eyed Dragon" by D.M. Trink. If you loved the movie "Goonies" you will fall in love with this book. A group of teenagers trying to solve a mystery. A FIVE STAR BOOK!! 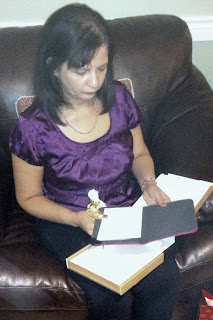 Author Bio:
Author Delyse Trink grew up in Greenfield Park,Quebec where she got her CEGEP degree in Economics. She later moved to Ontario, Canada and received her degree in X-ray Technology in which field she worked at for many years. She enjoys travelling,gardening and reading.

Her love of reading romance novels inspired her to write her first romance novel Wrapped in a Rainbow.
She has received an Editor's Choice Award for an anthology submission.
Her most recent release The Crimson-Eyed Dragon is her version of a modern-day Hardy Boys/Nancy Drew type of story. She next hopes to write a mystery/suspense novel based on her experience working in the medical field.

What the author says about The Crimson-Eyed Dragon:
I started writing this novel when my own son was the same age as the boys in the book. Having raised him and helped to raise my three stepsons, I am very familiar with teenagers and their actions. (At least those in my household!) Teens rely on their cell phones and text messaging so much these days to keep in touch that I used it as an integral part of my plot.
I think we need more books today like those we used to read, books that are about ordinary teens who are respectful and intelligent, but who are also curious, adventurous and eager to solve a mystery.
Chapter One Excerpt:
Unimaginable fear tore through his body and he wondered if his life would be cut short at sixteen. Could a teenager have a heart attack? Not just pounding or racing but his heart was erratically jumping, and thumping to be released from the confines of his chest. Deep regret filled Jared as he looked around at his friends and recalled the events he had initiated to lead them to their imminent demise.
It was a dragon figurine with red eyes and wings spread out for flight. Jared was entranced, dragons ranked right up there with his interests in sword and sorcery. The statue was about a foot high and maybe two feet across in width but it appeared solid and heavy so Jared took great care picking it up to examine it more closely. It was fascinating to Jared with its intricate etchings and mottled appearance. The silver was blackened in its deep grooves but that made it all the more beautiful. The eyes glowed like precious jewels and the dragon’s features looked majestic. As Jared carefully turned the statue over to examine its underside one of the eyes fell out. Jared’s reflexes were quick and he managed to catch it before it hit the ground. He looked around quickly to see if anyone had noticed his predicament but everyone in the shop was otherwise engaged.
An hour or so later Jared noticed that the sun had changed its angle and was now creating an eye-squinting glare on his computer screen. As he got up to shut his blinds, he noticed the way the sunlight was reflecting off the dragon statue’s crimson eye, causing it to shimmer and gleam.
“Cool,” murmured Jared as he leaned closer to examine it.
Also brightly illuminated by the powerful sunshine was the gaping hole from the other eye socket. Jared was fascinated to discover something deep within the socket that was now visible. It looked to be a raised button. Jared searched frantically on his desk for something small enough to reach into the tapered opening. He tried a pencil but it did not fit the narrow shape. Suddenly inspired, he ran down to the garage to his dad’s tool workbench.
“There has to be something here,” Jared thought to himself, rifling through items.
“Aha! A mini screwdriver set.” Jared grabbed it up and raced back upstairs.
He tried the smallest one first. Success! It seemed to hit the end.
Jared carefully applied pressure and with a loud creak, the dragon’s left wing dropped.
“Oh darn!” he shouted. “I’ve broken it!”
Annoyed with himself, Jared carefully hoisted the dragon to see what damage he had caused.
Posted by Debra L Martin at 7:00 AM