LICENSE FOR IMAGINATION by Suzanne Trypak

Holes in History—License for Imagination
By Suzanne Tyrpak

When I write historical fiction I look for the holes in history, because that’s where I can fill in the gaps and allow imagination free reign.

World building is essential for historical fiction and fantasy—the writer must create a world and sink the reader into it. In historical fiction, unlike fantasy, readers often have preconceived ideas about the world the writer is creating. For example, if I say ancient Rome, images will probably populate your mind. You may have gleaned these images through reading, movies, television, travel—but you have some knowledge of that time, and I don’t have to build the world from scratch. As a writer, it’s my job to draw those images together for the reader and paint a picture which serves as the context of my story.

This involves a lot of research. And the research can be overwhelming. I’m not a historian. I write fiction. I do research so I can highlight details which will serve my characters and my story. Selecting these details is key. Too many details and my story will be boring, too few and it will lack authenticity. Deciding which details to put in and which to leave out is one of the great challenges of writing historical fiction.

Rather than war and politics, I’m interested in the daily lives of ancient people, especially the roles of women—a lot of that has not been documented. In order to create that world, I steep myself in fragments of writings, jewelry, household goods and my imagination.

If possible, I travel to the country I’m writing about. I work for an airline, partly because the job gives me access to travel. I’ve been to Egypt, Greece and Italy doing research for my stories. I like to smell the air, taste the food, see the light on the buildings, experience the people and explore the setting I plan to write about. I’m also a fan of museums—they help to bring time periods alive for me. For fact checking I sometimes use the internet, especially for photographs, but mostly I consult books. I have shelves of books about the times I write about. I’m particularly fond of the Eyewitness book series designed for children. These books are extremely well researched, and the photographs are wonderful.

For me, the process of writing historical fiction is one of going back and forth: write, research, write, research. Initially, I’m drawn to a time period because of a certain character or event. I learn more about that character or event, and a story begins to form. I read more about the time period. Other characters show up. The story evolves. As I write, I do more research. The characters evolve. The story may go in a new direction. I have to check my facts, to be sure that this is possible. I narrow the time down to a particular year, a particular month, even a particular day. And this goes on throughout the writing of the book. I’m constantly researching as the story unfolds, constantly checking facts and timelines as I weave the threads.

I like using a mixture of historical figures and fictional characters. Usually, my protagonist is fictional—or very little is known about her—because this gives me more leeway as a writer. I research the historical figures, and I’m always delighted to find holes in the information. The holes allow my imagination to work overtime. What if...I ask myself and the story begins to unfold. Other characters come onboard—some from history, some made up, but they always drive the story forward with conflict.

Personally, I’m interested in telling a compelling story—a suspenseful story—that’s set in a time period that I find interesting. I want my stories to be believable, possible, maybe even shed light on history and offer alternatives to accepted history. The holes in history are what I find most fascinating. The holes provide the mystery. 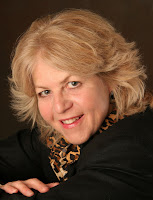