The World of Symbols: The Unicorn 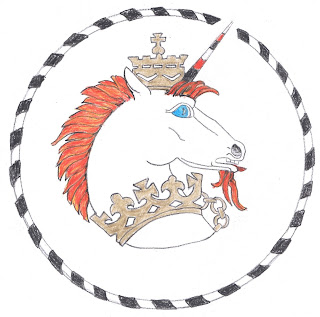 by Michelle Snyder, Symbologist
Unicorns are one of the most loved symbols in art. The mythology of the unicorn is ancient and is concentrated in the northern hemisphere. Placing symbols in historic context is important when decoding them; knowing when and where a symbol was used is the first step. Who, what, when, where, why, and how are important questions to ask.
Although the opinion that unicorns really existed is common, to date there is no provable evidence beyond the many images that resemble oral tradition and literary descriptions. In ancient China the unicorn is called Ki-lin, was a badge of kingship, and symbolized kingly qualities. Emperor Fu Hsi (2852 - 2738 BC) is said to have received the secrets of written language from a unicorn 2,800 years ago. Like the western unicorn, the elusive Ki-lin is solitary and hard to capture. Considering their qualities, the images likely have a common ancestor.
As with many symbols, unicorn legends developed a dark side. The mythology of a dark, menacing unicorn developed from tales of the dangerous and mean-spirited wooly rhino during the Paleolithic (12,500 BC). The history of the more common white unicorn mythology developed from narwhal hunting during the same time period.
In folklore from Babylon, c. 3500 BC, the lion and the unicorn hate each other; a battle that may have roots in the unicorn, which represents spring, and the lion, which represents summer. England, with a lion emblem, and Scotland, with a unicorn, were at war for a long period; the battles are remembered in a traditional nursery rhyme from 1603 where England was usually victorious:
The lion and the unicorn were fighting for the crown
The lion beat the unicorn all around the town.
Some gave them white bread, and some gave them brown;
Some gave them plum cake and drummed them out of town.
Today, the unicorn and the lion are reconciled on the British coat of arms, the unicorn as a symbol of goodness and honor in women, and the lion as a symbol of courage and strength in men.
In general, unicorns are associated with unified absolute monarchy, stressing courage, grandeur, wisdom, nobility, and justice. Unicorns are attributes of sun-heroes and are associated with courtly love. According to legends, only a virgin, on whose lap it willingly lies down, can catch a unicorn. An engraving from the 15th century depicts the “capture” of the unicorn; however, the maiden has removed the animal’s neck chain, and he is sitting with his head in her lap as she pets him.
What a symbol looks like is also important in decoding. Unicorns are often imaged as white horses with a single horn growing from their foreheads. In depictions of the unicorn and lion in the Royal Arms the unicorn has split hoofs, a small beard like a goat, and a tail that looks more like that of a donkey, which curls up over his back, like the lion he faces. The golden chain and crown around the unicorn neck denotes his royalty. Old esoteric writings describe the unicorn as having a white body, red head, and blue eyes; some have a horn that is white at the forehead, red in the center, and black at the tip. Added to the mythology associated with the unicorn, this description indicates royal Celtic origins, perhaps unicorns are a symbol for the bloodlines of princes and kings.
Unicorns are much loved characters in Faerie tales and their history has been preserved through these great stories. The character of Prince Charming, the hero prince, is the Unicorn at his best (the deconstruction of the Prince Charming ethic is evident in the film Shrek 2).
Article and artwork © 2011 Michelle Snyder, author of Symbology: Decoding Classic Images, available at Amazon. Her website is www.whiteknightstudio.com.
Posted by Debra L Martin at 8:00 AM