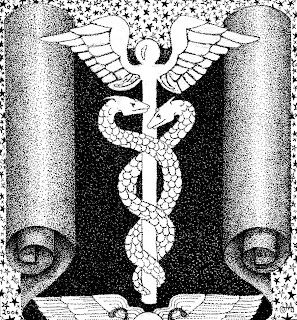 The World of Symbols: Caduceus
Michelle Snyder, the Symbologist
White Knight Studio
www.whiteknightstudio.com
The caduceus evolved as a symbol long before ancient Egypt, where the winged rod with two serpents entwined was imaged with the Egyptian god Hermes. Later in Roman mythology it is seen with Mercury, the messenger of the gods. Today the planetary symbol of Mercury is a representation of the caduceus. Mercury presides over commerce, and his rod, the caduceus, has become a symbol of commercial success.
The caduceus is associated with order. The word caduceus is from the Greek  for herald's staff, based on the word eruko, meaning restrain, control.  A legend from 1688  tells this story: In Acadia Apollo found two serpents biting each other. He thrust the rod between the quarreling snakes; they became immediately reconciled and wrapped around the staff. Subsequently the staff came to be seen as a rod of peace, and is carried by messengers as a symbol of peace and protection. The United States House of Representatives has a staff with a caduceus on top which is used to restore order when chaos enters House proceedings.
The caduceus has its beginning in pre-history, when Ashera poles were used for astronomical observations, to measure movement of the stars, and to establish a north/south line; an early surveyor’s tool. The ashera pole’s line of site between earth and sky became the central rod of the caduceus - the axis mundi, representing the axis of the earth which runs between the North and South Poles, a symbol of the path between Earth and Heaven.
The globe atop the rod depicts a reflective ball which allowed the Ashera pole to be seen from a great distance in any direction. The wings adorning the pole and globe have their roots in a symbol for north, which at that time was the star Deneb in the constellation Cygnus, the Swan. Cygnus is the basis for many bird mythologies, and wings are a symbol for moving time. From these came the royal orb and scepter, which embody the concepts of knowledge, health, and leadership - qualities attributed to those who could measure and record the movements of the heavens.
The snakes around the rod also represent ancient mariners, the Vanir, who were at one time referred to as the “snake-headed people”. Later associations to the snakes around the caduceus developed around 4000 BC, when along with owls and cats, non-poisonous snakes protected the stores of grain from rodent infestation, making friends of the old poisonous enemies; the cats of the Celtic goddess Freya have their roots in these protectors of the grain. The entwined serpents also came to symbolize opposites in perfect union, linking the caduceus symbol to alchemy, perhaps leading to its association with medicine.
Although the winged rod with serpents entwined commonly appears as a medical symbol, a more accurate image for this purpose would be the Asclepius rod, a rod with a single snake wrapped around it, a symbol derived from the method Dr. Asclepius (1200 BC) found as a cure for a condition where parasitic worms were present under the skin. He discovered that the worms would attach to a stick through a slit in the skin, and he could wind them around it, removing them. The rod of Asclepius symbol is similar to the description of the serpent Moses held up before the Israelites (Numbers 21:6-9), and is commonly used by veterinarians, medical and nurses associations, Medical Corps, and health organizations. The classic caduceus is also found on everything from ambulances and nurses’ pins to tubes of toothpaste, but is more accurately a symbol of commerce and the “order of business”.
Article and artwork  © 2011 by Michelle Snyder, author of Symbology: Decoding Classic Images, available at Amazon. Her website is www.whiteknightstudio.com.
Posted by Debra L Martin at 8:00 AM