World of Symbols: THE SUN by Michelle Snyder 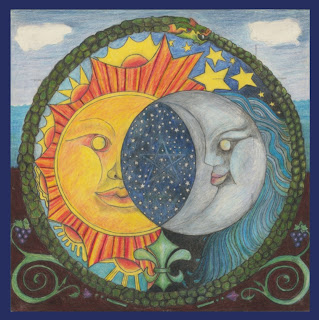 
All people are dependent on the sun; sun symbols have roots in ancient astronomical notations dating back more than 70,000 years. Our ancestors watched the heavens to learn about the cycles of the blazing star on which their lives depended. The first sun symbols were simple circles. During the ice age of 12,500 BC, blonde, curly-haired little girls represented the sun; their golden hair was like the sun, and both the sun and children are necessary for the continuation of life. Here we have the Sun-Child,  ancestor of the Sun-Maiden, Sun-Queen, and Sun-Goddess  Helen ­- sun symbols of the vast Vanir civilization, which, by 4000 BC, spanned from Norway to Africa.
Knowing when to prepare for winter, and when to plant new crops was crucial, circa 16,000 BC calendric symbols were used to record the yearly cycles of the sun. The Great Stone Circles, the megalithic observatories, were built to aid in observing the patterns of the sun and other heavenly bodies. Contemporary wheel symbols depict movement of heavenly bodies: the sun at the center, the spokes representing the sun’s beams. From these ancient observations grew the mythologies of the sun-kings, the dead and resurrected kings, and other legends. Astronomical associations are evident in the symbols of the sun-kings: Halos around the heads symbolize solar radiance, which has been assimilated to the radiance of enlightenment, sanctity, holiness, or divinity.
Few young students today understand the Analemma - the movement of the sun - or how critical this knowledge was to survival thousands of years ago. During winter solstice the sun reaches its lowest point on the horizon (at the Tropic of Capricorn). There it stays, “motionless,” for three days. When it rises again it brings with it warmth and change-of-season that allows crops to grow and life to thrive. The course of the sun through the heavens is an age-old symbol of the human life-cycle. The setting sun, its disappearance at night, and its rising again in the morning, link with the archetypal symbolism of death and rebirth.
The sun is the provider of light and warmth, renewing life in the spring. This knowledge has been the foundation of countless symbols, myths, and legends. In Incan myths the sun was worshiped as the divine ancestor of the nation. In Norse mythology Sunna, a sun goddess, rides in a horse drawn solar chariot. Abraxas, Apollo, and Helios also drive sun-chariots pulled by four horses; the horses are symbolic of the four seasons.  Ancient Egyptians worshiped Ra, a sun god. In Persia, Mithra was the god of light and wisdom. In Christian iconography the sun rising in the east symbolizes resurrection. Contemporary uses of sun symbols represent the intellect, the universal spirit, all-seeing divinity, intuitive knowledge, enlightenment, and illumination.
Sunlight is symbolic of intelligence and spirit: we speak of intelligent people in terms of being bright or brilliant, and of having bright ideas. We depict enlightened beings with halos. It seems appropriate that our terms for intelligence are associated with light; light is associated with the sun and stars, the study of which is astronomy – the heavenly lights. Today, as in prehistory, those with knowledge of the heavens are regarded as intelligent. Considering this, one could connect knowledge of astronomy with enlightenment. Each year we travel once around the Sun on this rock called Earth. Have a great trip!
Article and artwork © 2011 Michelle Snyder, author of Symbology: Decoding Classic Images, available at Amazon, Alibris, and Barnes & Noble online, and at The Book Rack Bookstore in Arlington. Post your questions on her blog at www.whiteknightstudio.com.
Posted by Debra L Martin at 8:00 AM