Sponsor: GIVE ME by LK Rigel 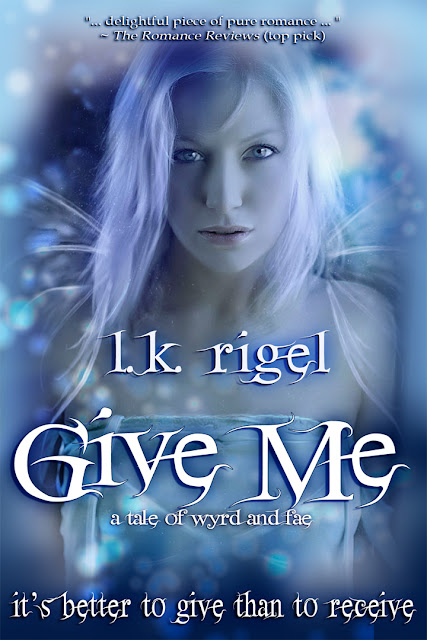 If you love Once Upon A Time, you may also enjoy Give Me, A Fairy Tale!


Book Blurb:
A young witch with a good heart. Two lovers in mortal danger. A spell that ends in disaster.

Lilith Evergreen lives in the California desert, an ordinary woman until her fiancé returns from London with a ring he bought from a street vendor. When Lilith puts it on she dreams of a green land that's anything but desert, a tree at cliff's edge, a ruined castle, and a handsome prince.

Then she discovers that it's all real.

When Lilith visits the ruins of Tintagos Castle, she discovers a world of magic and love - and its dark side when she's entangled in the remnants of an ancient spell gone bad. From the moment Lilith sees Cade Bausiney, she's overwhelmed with desire for him. Cade is drawn to Lilith too - but their feelings might only be sparked by dark and dangerous magic.

Lilith and Cade must break the old spell or be forever possessed by spirits who've waited a millennium to consummate their love.

I think I'm in love...Yes, this hardened feminist shell that I wrap around me like a coat-of-arms melted as I read this delightful piece of pure romance.


Originally posted at Book Bordello
1. Rich, loved or famous – choose one. Why?
Rich, no question. Wealth provides a life of freedom and the time to live it. Being loved is wonderful, but loving is better. I suspect fame would be more of a nuisance than a joy.

2. If you could have anyone serenade you who would it be and what would they sing?
The Koch Brothers, “Everything I Have Is Yours” – this would solve many problems.
3. We can all time travel now. Where would you go, what would you do, and why?
I would travel back to five minutes before the meeting at Fox where they decided to cancel Firefly and waylay the git who argued in favor of cancellation. The world would be a better place if we had at least four more seasons of that show in the can.
4. If you could live in the world of a book, tv show or movie, what would it be?
Firefly – if I could be Zoe.
5. What’s your guilty pleasure?
Costume dramas like Jane Eyre, Sense and Sensibility, Wuthering Heights, Poldark, The Abduction Club, The Forsyte Saga … I could go on forever.
6. What is your favourite tv theme?
It’s hard to beat Mr. Ed.
7. What was your favourite toy growing up?
I loved those slip and slide things, long strips of plastic with holes in them that hooked up to the hose and you just slid down them on your belly. It was like flying on the ground. With bruises.
8. What did you want to be when you grew up?
An actress.
9. What scares you the most?
Poverty in all its guises.

10. What’s your perfect lazy day?
Outside: thunder and rain and lightning. Inside: a fire, all my work is caught up, all my bills are paid, I have plenty of Nespresso pods at the ready, and the entire day is mine to read and write.
11. What is your earliest memory.
No lie: I was lying on a table kicking my feet and thinking, “Where is that thing that takes care of me?”
12. What’s the greatest gadget ever made?
Wine opener.
13. What’s your biggest pet peeve?
Ignorance.

I live in California with my television-watching cat, Coleridge. (His favorite show is Castle, but he was enthralled by Game of Thrones.) I've been a writer since my seventh grade teacher praised one of my stories in front of the whole class. I wrote songs for the 90's band The Elements, scored the independent science fantasy karate movie Lucid Dreams, and was a reporter for the Sacramento Rock 'N Roll News. In my thirties, I returned to school and received a BA in humanities with a focus on religious studies from CSU, Sacramento. Although I'm an atheist, existential speculation informs all of my stories - doesn't everyone wonder what it all means?
My work has appeared in Literary Mama and Tattoo Highway.
I write the postapocapunk "Apocalypto" series about the end of the world as we know it and the beginning of a new reality in which the gods return to save humanity from itself - with varying degrees of success.
My short story "Slurp" about an author with creativity problems on Halloween is included in DEADLY TREATS, Anne Frasier's Halloween anthology published by Nodin Press.
Posted by Debra L Martin at 8:00 AM