Review: THALOC HAS A BODY by Jerry Hanel 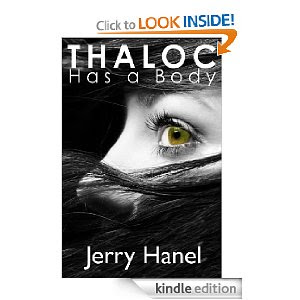 4 of 5 stars
I have the pleasure of reviewing the second book in the Brodie Wade series. “Thaloc Has a Body” by Jerry Hanel is another fast-paced story that keeps the reader turning the pages.  Once again, we are dropped into Brodie Wade’s life. He’s a psychic detective who works closely with his police detective friend, Phil Dawson, trying to solve unsolvable crimes.
In book 2 we learn more about Brodie, who sees and hears manifestations of The Truth. The Truth demands that Brodie follow certain clues and paths or he faces some hellish consequences. The author gives us a peek into Brodie’s past and we learn what really happened to his mother. Unfortunately, no one else can see these manifestations and Brodie has spent half of his life locked up in an Institution.  He’s damaged and timid out in public, but when Phil brings him a case that has the police stumped, Brodie reluctantly agrees to help his friend solve the case.
The author also brings in another character, Officer Jamie Stanton, who made a fleeting appearance in the first book in the series, “Death Has a Name.” The interactions between Jamie and Brodie are sweet and stay within the boundaries of Brodie’s sheltered life.  It was nice to see that the author did not all of a sudden make Brodie comfortable with outsiders.
Phil, Brodie and Jamie race against time trying to solve three murders. The catch is that they already know who the murderer is, but things just don’t add up. One of the murderers could not have possibly committed such a heinous crime and I’ll leave it at that so as not to have any spoilers in the review, but suffice it to say, there is a paranormal creature from ancient Egypt named Thaloc who is involved.  In addition to trying to solve these three murders, The Truth tells Brodie something that shakes him to the core. Can Brodie figure out the riddles of The Truth before it’s too late and more bodies pile up?
Once again in this book I found quite a few typos that jarred me out of the story. The book could definitely use the eyes of a good editor to take care of these. Also, I’m not sure what the cover of the book is supposed to depict. For me, it didn’t properly depict the scope of the book. Besides these criticisms, “Thaloc Has a Body” is definitely a good read. Anyone who likes thrillers will thoroughly enjoy this book. Recommended.
You can read my review of book 1, “Death Has a Name” here: http://twoendsofthepen.blogspot.com/2011/04/review-of-death-has-name-by-jerry-hanel.html
Posted by Debra L Martin at 7:47 AM