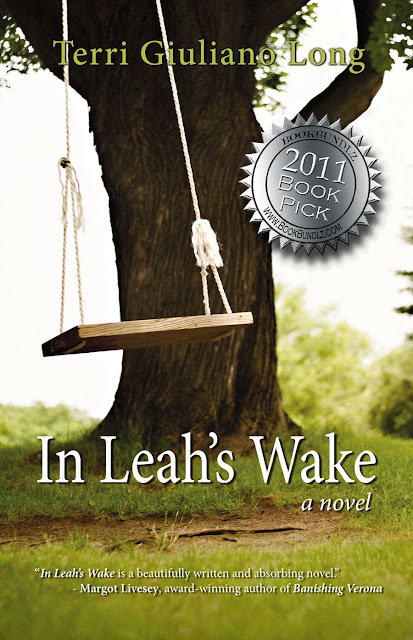 While her parents fight to save their daughter from destroying her brilliant future, Leah's younger sister, Justine, must cope with the damage her out-of-control sibling leaves in her wake.

This mesmerizing debut novel tells the tale of a contemporary American family caught in the throes of adolescent rebellion - a heartbreaking, funny, ultimately redemptive quest for love, independence, connection and grace.
Buy links:
Amazon Kindle:
http://www.amazon.com/In-Leahs-Wake-ebook/dp/B0044XV7PG/ref=sr_1_3?ie=UTF8&qid=1306533515&sr=8-3
Barnes & Nobles Nook: http://search.barnesandnoble.com/In-Leahs-Wake/Terri-Giuliano-Long/e/2940011264566?itm=1&USRI=In%2BLeah27s%2BWake
Amazon UK:http://www.amazon.co.uk/gp/product/B0044XV7PG/ref=s9_simh_gw_p351_d0_i1?pf_rd_m=A3P5ROKL5A1OLE&pf_rd_s=center-2&pf_rd_r=0KPRJ2ETYF4CYY623Y5P&pf_rd_t=101&pf_rd_p=467128533&pf_rd_i=468294
Reviewer's Comments:
http://www.tglong.com/blog/reviews/
Holly Robinson, contributing editor Ladies' Home Journal
"In Leah's Wake is an irresistible read."
Susie Kline
"As a mom, I felt what Zoe felt. It tore my heart out to see the promise of a child being being replaced with the nightmare of reality… I’m adding Terri Giuliano Long to my list of authors I want to be stranded with."
Monica Madsen
"I give “In Leah’s Wake” 5 stars and recommend reading to anyone with tweens. Although it is fiction, this book can be a great reference for parenting teenagers."
Interview Questions:
Why did you decide to become an Indie author?
In 2006, the book was under contract with an indie publisher. Shortly before the release, problems emerged. Soon after (unrelated to me), the company folded. I sent the book to a handful of agents, received lovely, complimentary responses, but no offers. I really believed in this book. I’d received so much encouragement over the years, from agents, editors, readers, writer friends—I’m grateful, truly grateful to all of them—that I had a hard time letting go. For years, I tried to revise. Eventually, I realized I was writing in circles. The book had changed, but it had gotten no better. Reluctantly, I put it away.
Last year, after several false starts, I finally gained traction on a new novel, my psychological thriller, Nowhere to Run. Like In Leah’s Wake, Nowhere is a family story at heart.  I knew I’d need a platform for this new book, and hoped that self-publishing In Leah’s Wake would help me build one.
A lot of people self-publish today; for me, the indie route was a new, and scary, avenue. It’s been bumpy ride – and the best thing I’ve ever done for myself.
Do you have an agent? Do you think they’re vital to an author’s success?
That’s a tough question. No, I don’t currently have an agent. Indie authors don’t need agents, of course. For writers who hope to publish with the big houses, an agent is an absolute necessity. A good agent will sell your book, shepherd you through the publishing process and help you think through your new projects. This is an invaluable service. A great agent is worth his or her fee in gold.
What was your first acceptance and is being accepted still a thrill?
My short story, “You Belong to Me,” published by Think magazine, was my first acceptance. Sure, acceptance is always a thrill. It means someone loves your work, which feels a lot like loving you. You feel that same initial energy you feel in a new relationship. As I’ve gotten older – I’ve been writing for 16 years – I’ve learned to take my career into my own hands. While I’m still excited by acceptance, I no longer need it to sustain me.
Have you had any rejections? If so, how do you deal with them?
LOL – yes, sure. I don’t know a writer who hasn’t. I try to separate myself from my work. A short story or novel I’ve produced is my work; it’s not me. Readers are subjective and taste idiosyncratic. The most successful – as well as the most artistic – work receives both good and bad reviews. You can’t expect every reader to love your work. If you look at rejection from this perspective, it’s a lot easier to accept.
What has been the toughest criticism you’ve received? The best compliment?
I’ve had some scathing reviews, of late. While I’d love all 5-stars, that’s unrealistic. Taste is largely individual, so I don’t expect everyone to love the book. In Leah’s Wake is relatively fast-paced for literary fiction, but it’s neither a genre nor a plot-driven book. This in itself is a turnoff for some readers.
I’ve had wonderful reviews; the most moving was the blogger who said this: “Speaking to women who have read the book I have seen a lot of emotional and personal connection. It gave me a lot to think of both in my marriage and with raising my kids. Did you ever think that the book would make such an impact?”

Every writer hopes to connect with readers. I hoped people would recognize themselves or their friends, and that this might encourage a closer sense of community. I really believe, as Dostoevsky says, that we’re all responsible to one another. But I wasn’t at all sure how readers would feel or react. These words - hearing that my book has had an impact or touches people - move me deeply.


Do you have any upcoming projects in the works or other books that have been published?
I’m currently working on a psychological thriller with a historical twist. Nowhere to Run takes place in the White Mountains in northern New Hampshire. A year after the brutal murder of her six-year-old daughter, Abby Minot, formerly an award-winning writer, accepts her first assignment—a profile of the philanthropic Chase family, kin of the popular New Hampshire senator and presidential hopeful, Matthias Chase.
In her initial research, Abby glimpses darkness under the Chase family’s shiny veneer. Digging deeper, she uncovers a shocking web of lies and betrayal, dating back to the nineteenth century. Abby soon finds herself trapped—between an editor obsessed with uncovering the truth and the town and family who will stop at nothing to ensure it stays hidden.
Website: www.tglong.com
Blog: www.tglong.com/blog
Twitter: https://twitter.com/tglong
Facebook: http://www.facebook.com/tglongwrites
Author bio:

Terri Giuliano Long grew up in the company of stories both of her own making and as written by others. Books offer her a zest for life’s highs and comfort in its lows. She’s all-too-happy to share this love with others as a novelist and a writing teacher at Boston College. She was grateful and thrilled beyond words when her award-winning debut literary novel, In Leah’s Wake, hit the Barnes and Noble and Amazon bestseller lists in August. She owes a lot of wonderful people – big time! – for any success she’s enjoyed!
Posted by Debra L Martin at 8:00 AM