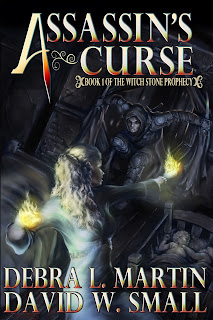 Here's a sample from our new book, "Assassin's Curse, Book 1 in the Witch Stone Prophecy." As an added bonus, the book is FREE today only. What do an assassin's guild, a witches coven and 2 twin girls have in common? Check out our book and find out. Enjoy!

The Prophecy of the Witch Stone
From the line of power twice born
To the power born twice
Shall arise the seekers of the Stone.
Look for the sign of the witch in two joined
For they shall be the saviors
Who shall grasp the power from darkness
And bring it into the light
For when the flower blossoms
Then will be the time
For their powers shall be twined within a single aspect
And stand balanced on the sword’s edge of good and evil.
False guidance shall lead to the path of doom
And will spell destruction of all
That they were brought about to save.

***
Mave saw the boy look his way and inwardly smiled.  He knew the boy was scared, and rightly so.  It was not chance that brought him here today, but a carefully orchestrated scheme to make sure he tested the boy.  He felt Jeda was no more than a third-year upstart who did not deserve the opportunity to test for apprenticeship.  Most novices trained for five or six years before petitioning to test.  Mave was going to make sure that the boy did not pass.  That was as it should be, for it was Mave who had brought Jeda to the guild in the first place.  He should be the one to put the boy in his place and teach him humility.
Jeda finally reached up and took a pair of fighting knives off the wall.
Mave shook his head at the boy’s choice.  I knew it.  The boy may know how to fight, but he knows nothing of winning.
“Begin,” said the dispassionate voice of the master-in-attendance judging the test.
Mave strode forward, closing the distance and eliminating the only advantage knives would give the boy.  Without the distance to throw them, they were completely useless against swords.
The boy stood stock-still, visibly trembling as Mave approached.  His frozen fear was pathetic and almost embarrassing.  Mave would cut him slightly with his first blade and knock him out with the handle of his second, putting a quick end to this charade of a test.  Twirling his swords in a deadly dance, Mave felt no sympathy for the boy.  Today’s failure would set Jeda back at least a year and give him more time to learn proper respect and modesty, traits Mave felt he was sorely lacking.
The young fool doesn’t know what he’s in for.
As Mave swung the first blade to catch the boy across the cheek, something unexpected happened.  Jeda dove forward, under the first blade, and whipped one of his knives at Mave’s exposed side.  Mave deflected the throw with his second sword.  If he had not been such an excellent swordsman, the throw would have a scored a hit.
Maybe not quite the fool I took him for.  Mave spun around swinging the sword in a deadly arc to face the boy as Jeda jumped to his feet.  The swing cut the boy high on the arm and he cried out in shock and pain.  The cut was deep and bleeding heavily, rendering the arm useless.  The boy went down on one knee, but Mave moved cautiously forward.  He would not be caught off-guard a second time by the boy’s cleverness.  When Mave came within a sword’s reach of him, the boy jumped forward into a diving roll and threw his second, remaining knife.  Mave anticipated the move and easily deflected the throw, shaking his head at the boy’s stupidity in throwing away his last means of defense.  As he turned to face Jeda, he realized his mistake.  He felt a blade slice through his trousers, burning and drawing a bright-crimson line along his leg.  Jeda had used the second throw to distract Mave from his true objective: the first blade that Mave had deflected.  The boy had used his diving roll to reach that first blade, left forgotten on the floor.
How did he get that knife so quickly and throw it so precisely? Mave wondered, looking down at his bleeding leg.
“Enough.  Blood has been drawn by Novice Jeda,” said the master’s voice from the balcony.  “He is elevated to the rank of apprentice.”
Mave studied Jeda with a smoldering anger.  He was a good fifteen feet away and was wobbling on his feet from loss of blood.  It didn’t seem possible that he could have thrown that knife in his condition.  Mave knew the boy must have somehow cheated.
This is not over; no one makes a fool of me.

Amazon link: FYI, if you are an Amazon PRIME MEMBER, you can borrow the book for FREE anytime.
http://www.amazon.com/Assassins-Curse-Witch-Prophecy-ebook/dp/B006T3HN2A
Posted by Debra L Martin at 8:00 AM