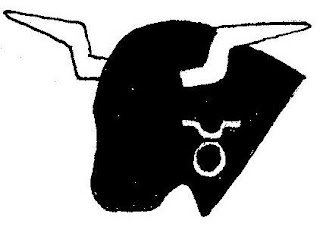 Taurus the bull was one of the earliest recorded constellations; Taurus is Latin for bull. The Lascaux culture of 14,500 BC understood and recorded astronomical patterns and calendrics - this knowledge was critical to their survival. From them come some of the oldest symbols on record, as well as prehistoric calendrics depicted in cave art. One well known image is that of the bull in Lascaux Cave. This painting looks almost exactly like modern depictions of Taurus. Patterns of dots located over the shoulder of the Lascaux Bull could represent the star group Pleiades, sometimes called Seven Sisters, located in the constellation Taurus. Like other zodiac symbols, myths and folklore about the Taurus constellation can be found around the globe.
In Greek myths, Taurus represents the Minotaur, kept by King Minos of Crete, whose kingdom was in the Mediterranean. As the story is told, Poseidon, the sea-king-god, was angry with Minos and seduced the king’s wife. From this union was born a Minotaur. This powerful - and some said dangerous - creature was kept in a labyrinth, until Theseus killed it. In later versions the labyrinth was changed to a maze - a place with many possible paths, almost impossible to get out of. It is said the king’s daughter, Ariadne, gave Theseus a spool of thread (called a clue) with which he was able to retrace his steps through the maze and escape, after besting the Minotaur. A labyrinth would not make a good prison, as the geometric design consists of two spirals stemming from a directional cross, with only one opening. One could keep walking in a labyrinth and find the entrance/exit. To decode the symbol of the Minotaur, we must look at the symbolism of the labyrinth - an archetypal image representing the center, the source, the sacred place - a secret. (Some myths state the Minotaur was imprisoned to protect others from the dangerous monster; secrets are sometimes dangerous.)
Placing the characters of this story in context of history and climatology helps decode the symbols of the bull and the labyrinth as stories of ancient sea kings (symbolized by Poseidon), and their knowledge of navigation.  A Minotaur is part bull, indicating a connection to Taurus. Pleiades is associated with the Greek word plein, which means to sail. A labyrinth represents ½ year (spirals symbolize three months each), and so it is a symbol of two seasons. To the ancients, the appearance of Taurus and Pleiades in the sky signaled the beginning of storms during the fall and winter; not great sailing weather, and without superior navigational skills sailing would be deadly. The ability to navigate during these two seasons would have been advantageous for both trade and defense, and a skill worth keeping secret. According to Duncan-Enzmann, the ancient mariners knew how to calculate longitude thousands of years ago; this gave them the ability to sail in bad weather, and thus superior power on the sea. And so, deep in the labyrinth, the Minotaur protects the secrets of calculating longitude.
The practice of symbolizing knowledge to protect it and insure its survival through generations is evident in the zodiac stories - the oldest stories in the world. Taurus is one example of a star-story that has its roots in prehistoric records of astronomical observation, navigation, and “trade secrets”.
Article © 2011 Michelle Snyder, author of Symbology: Decoding Classic Images, and eBooks World of Symbols, and World of Symbols: Secrets of the Mermaids. To find these books, and her symbolism blog, visit www.whiteknightstudio.com.
To read an interview with Michelle, click here: http://twoendsofthepen.blogspot.com/2012/01/interview-with-michelle-snyder.html
Posted by Debra L Martin at 8:00 AM