Was Merlin from the planet Otharia? 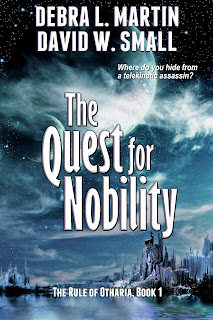 At least that's what Dave and I are proposing in our Rule of Otharia books. The Arthurian legends of Merlin the Magician and the Lady of the Lake are steeped in mystery and legends. How was Merlin able to do those incredible feats that he's credited with? One answer could be that he wasn't from Earth, but from the distant planet, Otharia. He was a powerful telekinetic and along with Vivienne (Lady of the Lake) who in her own right was a powerful empath, they were able to awe the primitive people with their "magic."

There is a link between the distant planet of Otharia and Earth. Here's the prologue for book 1, QUEST FOR NOBILITY. It will explain how Merlin and Vivienne came to be on Earth in the first place.

With bloody sword in hand, Reaver looked over the scene of the massacre.  It did not sit well with him, what he had done, but he was loyal to his commander.  The orders had been simple: kill them all, and so he had done his best.  Now, with most of the killing done, he had time to reflect.
May the gods have mercy on our souls.
***
The Telkur duty telekinetic looked up as the unauthorized portal started to form. He checked the coordinates and was shocked to see that the incoming portal was from the planet Earth. That off-world expedition was not due to check in for another month.
“What the...”
Before he could finish his sentence, two bloodied men staggered through the opening.
“We’ve been attacked,” the first man said. “All is lost.”
More men and women stumbled through the portal with varying degrees of battle wounds. The duty telekinetic was stunned. Earth was a primitive planet, but from all the previous indications, its people were peaceful.
Snapping out of his shock, he opened a comm link directly to the Duke of Telkur.
“Sire, we have trouble at the portal station. Some of the expedition members are back and are badly wounded.  Please come immediately and bring the healers.”
***
The gavel banged and the Master Clerk read the declaration.
“Let it be known that, from this day forward, off-world travel to the planet Earth is prohibited.”
Duke Rael Telkur sat unmoving in the Grand Council chamber room. The decree was final. There would be no more travel to Earth. He had lost a fortune financing the ill-fated expedition.  It had required four 10K crystals powering the portals to transport the hundred-plus explorers and their supplies.  Normally, a 10K crystal would provide a duchy with more than three years of local planetary travel.  But more importantly than the crystal expense, he had lost fifty loyal men and women to brutality.  Only five of his expedition team had made it back to Otharia, but they all subsequently died of their wounds.  The Vogdo team members had fared only slightly better; a mere ten of their men returned.
Rael glanced down the table to where his partner in this venture, Duke Jaks Vogdo, sat stone-faced. There was nothing more to be done.
Jaks looked at Rael and nodded.  You naive fool, Rael.  If only you knew the truth.
Jak’s duchy was rich in crystal mines located within the Sharellian Mountains.  Everyone believed the crystal veins were bottomless, and the Vogdo family thought the same until the veins started to dry up.
Fate and fortune had shone favorably upon Jaks Vogdo when mineral-rich Earth was discovered. He eagerly agreed to form an alliance with Rael to explore this strange new world. They would share expenses for the exorbitant cost of off-world exploration and divide any potential riches evenly.
At least that was the plan, but greed has a way of eliminating alliances even among friends. Blinded by unimaginable wealth, Jaks had no compunction about turning on his partner and ordering the massacre of the Telkur team members.
“The crystals must be shipped back here without a trace,” Jaks told his man on Earth.  “I’ll open the portal from Earth directly into my mines and transfer the foreign crystals unseen.  No one will ever know the truth.”
***
“I told you this would work,” Merlinius Telkur said.
His partner Vivienne shook her head at his boasting.  She hated this planet Earth.  They had been running for days from the Vogdo hunting party and she was at the end of her patience.  Their 10K traveling crystal was gone and they had no way to return to Otharia or even contact them to let them know what had transpired here.  There were so few of the Telkur expedition that had escaped the initial attack, and now they were stuck on this primitive planet.
“Save your breath, Merlinius,” Vivienne shot back.  “Just concentrate on holding your shield until those bastards out there leave and we can get out of here.”
“I know that,” Merlinis replied, exasperated at Vivienne’s curt command.  “You make sure your own shield holds.  If they detect our life signs, this ruse will be for nothing and we’ll have to run again.”
Vivienne sighed heavily.  At the moment, she didn’t know which was worse: Merlinius’ bravado, or being stranded on Earth with a band of Vogdo killers outside the cave hunting them.