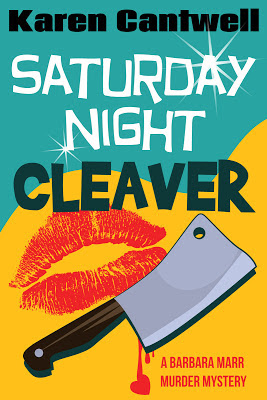 Book description:
Poor Barb. She just can't stay out of trouble, no matter how hard she tries. But this time she has a good reason: family friend Colt Baron has gone missing. When soccer mom, Barbara Marr, and her ex-FBI husband, Howard, begin following clues in a search for their treasured pal, they find themselves crashing a rather racy sort of party – a soiree for swinging couples. Awkward. What they learn there is...interesting. But the question is, does the information lead them to Colt?

This fourth book in the Barbara Marr Murder Mystery Series teams Barb with her handsome husband Howard in yet another rollicking and hilarious suburban fiasco...

I have been writing plays and short stories for many years, some of which were published in various college literary magazines. In 2010, my short story “The Recollections of Rosabelle Raines,” was published in the mystery anthology Chesapeake Crimes: They Had it Comin’ available at Amazon, BarnesandNoble, or directly from the publisher, Wildside Press.

But I had always wanted to write a novel. I found that more difficult. Finally, a few years ago I became inspired to write my first novel, "Take the Monkeys and Run," a comedy-mystery, inspired, to some degree by a true monkey sighting. I followed that up with a Barbara Marr short story collection, "The Chronicles of Marr-nia," and two more mystery novels, "Citizen Insane" and "Silenced by the Yams."

Because I love to laugh as well as make other people laugh, I have the most fun imagineable writing the character Barbara Marr as well as her friends and adversaries. When I set out to write these books, I knew I wanted to write something that readers would say, “Now that was FUN.” I HOPE I have achieved that goal. And if I did, please feel free to drop me a line at and let me know! I love to hear from readers. (especially if you LIKE the book!)