THERE ONCE WAS A GIRL...by Ludmilla Petrushevskaya 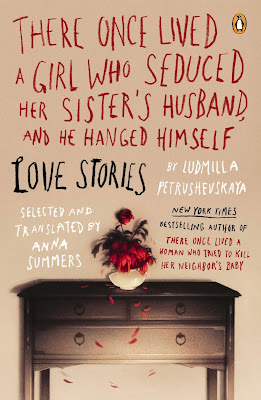 Renowned Russian writer Ludmilla Petrushevskaya is back with a new collection of macabre love stores: THERE ONCE LIVED A GIRL WHO SEDUCED HER SISTER’S HUSBAND, AND HE HANGED HIMSELF—translated with an introduction by Anna Summers, decked out with fantastic cover art, and just in time for Valentine’s Day

Petrushevskaya’s previous collection of scary fairy tales, There Once Lived a Woman Who Tried to Kill Her Neighbor’s Baby, was a the New York Times bestseller, winner of a World Fantasy Award, one of New York magazine’s Ten Best Books of the Year and one of NPR’s Five Best Works of Foreign Fiction.

In this new release, Petrushevskaya demonstrates how much can be said about human connection with so few words. These realist tales of women looking for love are the stories that she is best known for in Russia . Stories from this collection have been published in Harper’s, Playboy, The Paris Review and Zoetrope and the early reviews are fantastic: Elle calls it “on par with the work of such horror maestros as Edgar Allen Poe,” and Kirkus raves, “Think Chekhov writing from a female perspective.”

THERE ONCE LIVED A GIRL... is made up of seventeen fables of marriage, courtship, sex, and love: the office one-night stand that creates a baby; the awkward tryst in a communal apartment; the responsible father chased away from his family by an insane and jealous wife; and the unremarkable and predictable souls who find they have drifted inevitably into union. Romance, violence, infidelity, tenderness—Petrushevskaya has compiled all of those great narrative traditions into an elegant and macabre collection of stories that show just why she is Russia ’s preeminent contemporary fiction writer.
A Murky Fate Excerpt:

This is what happened. An unmarried woman in her thirties implored her mother to leave their one-room apartment for one night so she could bring home a lover.

This so-called lover bounced between two households, his mother’s and his wife’s, and he had an overripe daughter of fourteen to consider as well. About his work at the laboratory he constantly fretted. He would brag to anyone who listened about the imminent promotion that never materialized. The insatiable appetite he displayed at office parties, where he stuffed himself, was the result of an undiagnosed diabetes that enslaved him to thirst and hunger and lacquered him with pasty skin, thick glasses, and dandruff. A fat, balding man-child of forty-two with a dead-end job and ruined health—this was the treasure our unmarried thirtysomething brought to her apartment for a night of love.

He approached the upcoming tryst matter-of-factly, almost like a business meeting, while she approached it from the black desperation of loneliness. She gave it the appearance of love or at least infatuation: reproaches and tears, pleadings to tell her that he loved her, to which he replied, “Yes, yes, I quite agree.” But despite her illusions she knew there was no romance in how they moved from the office to her apartment, picking up cake and wine at his request; how her hands shook when she was unlocking the door, terrified that her mother might have decided to stay.

The woman put water on for tea, poured wine, and cut cake. Her lover, stuffed with cake, flopped himself across the armchair. He checked the time, then unfastened his watch and placed it on a chair. His underwear was white and clean. He sat down on the edge of the sofa, wiped his feet with his socks, and lay down on the fresh sheets. Afterward they chatted; he asked again what she thought of his chances for a promotion. He got up to leave. At the door, he turned back toward the cake and cut himself another large piece. He asked her to change a three-ruble bill but, receiving no reply, pecked her on the forehead and slammed the door behind him. She didn’t get up. Of course the affair was over for him. He wasn’t coming back—in his childishness he hadn’t understood even that much, skipping off happily, unaware of the catastrophe, taking his three rubles and his overstuffed belly.

The next day she didn’t go to the cafeteria but ate lunch at her desk. She thought about the coming evening, when she’d have to face her mother and resume her old life. Suddenly she blurted out to her officemate: “Well, have you found a man yet?” The woman blushed miserably: “No, not yet.” Her husband had left her, and she’d been living alone with her shame and humiliation, never inviting any of her friends to her empty apartment. “How about you?” she asked. “Yes, I’m seeing someone,” the woman replied. Tears of joy welled up in her eyes.

But she knew she was lost. From now on, she understood, she’d be chained to the pay phone, ringing her beloved at his mother’s, or his wife’s. To them she’d be known as that woman—the last in a series of female voices who had called the same numbers, looking for the same thing. She supposed he must have been loved by many women, all of whom he must have asked about his chances for promotion, then dumped. Her beloved was insensitive and crude—everything was clear in his case. There was nothing but pain in store for her, yet she cried with happiness and couldn’t stop.