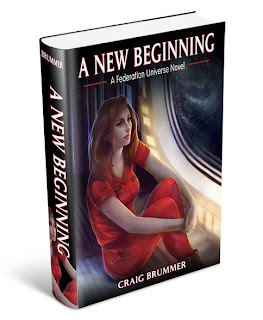 Can you give us a brief overview of your latest book? Is it part of a series?
A New Beginning is set in an era where man has just begun colonizing space stations and a few planets. Earth is controlled by mega-corporations that rule the political bodies and economies of Earth, much as ancient kings ruled their realms. The story centers on how a young indentured worker, Kristin Hayes, gains her freedom and happiness, and how her actions intertwine with the policies of Earth and the Federation. The story shows how spacers rise to the challenges that face them, and how a young woman from Earth finds happiness in space.

This is my debut novel, but my next several books will all be set in the same universe. Various characters overlap from one story to another, but each story has its own protagonists.

Did you try the traditional route to publishing, i.e. querying agents/publishers?
I tried the tradition route about 15 years ago with a very different story. My daughter, now a H.S. school teacher, spent 8 or 9 years as a literary agent at one of the NY firms. This time I decided on going the indie route for several reasons, mainly more control over my own work, and I believe it will prove to be more rewarding as I find the business side of publishing very interesting.

What factors influenced your decision to self-publish your book(s)?
Today, new authors really get no support from publishers. So a writer must give up a lot of control, and a large amount of income, simply to have a major publisher print their work. By going the indie route I have more freedom about what I write, my writing style, and how best to market my novel. Being able to tell the story the way I want is important to me as a writer. Also, getting an agent frequently takes a year or so, then they have to find a publisher who likes the story, and then you have to get worked into their production schedule. All of that takes a few years. As an indie author, my story goes to market about three months after I finish it. That time is used for the editing process, beta readers, book formatting, etc.

If you used a graphic designer/publisher’s designer, how involved were you during the creative process for your cover?
My cover art was done by a young German artist, Djamila Knopf. She and I connected through a website, DeviantArt.com. I loved some covers she had for other authors, as well as some of her public art. She was great to work with. I told her exactly how I envisioned the cover and character (Kristin Hayes). Djamila did a few sketches, then a couple revisions before doing the final work in color. The final work was exactly as I envisioned the character and setting. The book design was done by SGWdesign.com; that included the cover design, back cover and text formatting. SGWdesign.com also did a fantastic job, exactly what I wanted, including some modifications, and all done very timely.

Do you belong to a critique group? Have they helped improve your writing?
Interesting question. I did belong to the DFW Writers Workshop for a number of years when I lived in Dallas. They are a great group, and I encourage any writers in that area to contact with them. My writing certainly did improve during my time there.  I now live in Atlanta and participate with an online group, Critters.com, that is also a great group to work with.

Did you hire an editor to review your manuscript before publishing?
Absolutely. In my opinion, a book edited solely by the writer is a book that hasn’t been edited. As a writer, you’ve read each paragraph many times so you’re too close to it to catch errors; your mind sees what it knows should be there. Lack of good editing is a problem with a number of indie books I’ve come across myself, but I have to add that recently I’ve been seeing some very poorly edited books from the mainstream publishers. Let me also say, I’ve read a lot of outstanding, well-edited indie books over the last few years. Indie books now account for half of all my own reading.

Besides Amazon, are there any other sites where your books are for sale?
The Kindle version should be on Amazon by April 22nd and all other major retailers (iBooks, Nook, etc.) shortly after. The trade paperback will be available by April 29th at Amazon, B&N, etc. I am also having an audio book version done, but that will not be out until sometime in June. When it comes out it will be available at Amazon, iTunes and audible.com.

What kinds of marketing [twitter, facebook, blog, forums] are you involved with for promoting your book(s)?
I am very active on Twitter, @craigbrummer, so I will of course be making announcements on it. I have a blog on my website at www.craigbrummer.com  where there is also additional information on my writing and me. On Facebook my page is http://www.facebook.com/authorcraigbrummer . I will be running ads on Goodreads.com, and possibly some other sites depending on the results I see at Goodreads.com.

Do you find it difficult to juggle your time between marketing your current book and writing your next book?
Juggling time between my day job--something most authors must have, including those who go the traditional route--and my writing is difficult as I travel a great deal. More accurately, it of course limits my time for both writing and marketing my writing, but that simply requires me to be better organized. With this novel I did learn that it takes about two months for the editing, beta readers and formatting processes to get completed. Though I was familiar with the processes, they were still new experiences for me and did delay the start of my second novel. However, the outline is completed and I have started the writing.

What advice would you give a new author just entering into the self-publishing arena?
I’ve been writing for 20 years, and during that period have explored the traditional process and self-publishing. Kindle was a huge innovation and has really changed the industry. I believe most authors today are better served by going the indie route; that was not true 20 years ago. New authors should avoid vanity presses. They need to research, study and learn all about the self-publishing process and industry. Have their book professionally edited and professionally formatted. Work to hone their writing skills.  As an indie author, you have to market your own book; but the big six publishers, with rare exceptions, don’t market new authors either.
Posted by Debra L Martin at 8:00 AM