Stories My Mother Told Me by Rebecca Forster

My parents made a pact to stand on every continent in the world. When my dad passed away, my mother went to the Antarctic for both of them. That’s when I figured there was a lot I didn’t know about mom.

When she returned with a bright orange jacket that she got ‘for free’ (don’t count the cost of the cruise), she had lots of stories to tell. Yet, when the excitement of the trip wore off, we both had the sense that we were still standing on a pitching deck with no way to sail to calm seas. A big piece of the puzzle – my dad – was missing.

“Write your memoir,” I said.

“My life wasn’t interesting,” she answered.

But the idea must have taken hold. Not long after this conversation, she called. She was done with her memoir.

It takes me months to write one novel and she finished hers in a week. When I saw her manuscript, I understood why.  It was five pages long and she was eighty-five years old. There had to be more.

So began a year of weekend sleep-overs as we poured over photographs for inspiration. She had twenty beautifully documented photo albums, a box filled with pictures taken when cameras were still new fangled things.

There was mom in waist-length braids and Mary Jane shoes standing in the German village she called home.

She was a teenager in the U.S. while war raged in Europe, threatening the grandmother she had lived with, cousins and friends.

Here was mom, posing in a swimsuit she bought with the dollar she found on the street.

Mom in her twenty-five dollar bridal gown perched in the back of a hay wagon beside my father, a skinny, wide-eyed farm boy who would become a doctor.

Mom with one child. Two. Three. Five. Six of us all together. Dark haired and big eyed, we were her clones dressed in beautiful, homemade clothes. I remember going to sleep to the sound of her sewing machine.

And there were words!  I bribed my mother with promises of Taco Bell feasts if she gave me details. Funny, what came to her mind.

To keep body and soul together when my father was in med school, he was a professional mourner and bussed tables for a wealthy fraternity. My mom worked in a medical lab where the unchecked radiation caused her to lose her first baby. They ate lab rabbits that had given their all for pregnancy tests.  They were in love and happy and didn’t know they were poor. But St. Louis was cold, she remembered, and they couldn’t afford winter coats. Still, she insisted, they weren’t poor.

She typed, I edited; I typed, she talked. My youngest brother almost died when he was 10. She didn’t cry for a long while; not until she knew he would live.  The captain of the ship that took her back to Germany was kind.  She dreamed of becoming a missionary doctor. In 1954, she had two toddlers (me and my brother) and another baby on the way when she and dad drove to Fairbanks, Alaska where he would serve his residency at the pleasure of the U.S. Air Force. Her favorite outfit was a suit with a white collar. She loved her long hair rolled at her neck in the forties.  In the fifties she made a black dress with rhinestone straps and her hair was bobbed. In the sixties she made palazzo pants and sported a short bouffant.  She looked like a movie star in her homemade clothes. I wanted to grow up to be as glamorous as she was. She still thought she wasn’t interesting.

Mom wrote the forward to her memoir herself. It began:

A great sense of loneliness fills the house as twilight approaches. In the silence, I can almost hear the voices of my grown children as they recall their childhood years, the laughter of grandchildren and the quiet conversations of friends who have gathered here in years past, echoing through the empty rooms.

You see, she really had no need of my help as a writer.

We had seven copies printed. On the cover was a beautiful picture of a sunset. She called her book In The Twilight of My Life and would not be swayed to change it. Mom thought it perfect and not the least depressing. It was, she laughed, the truth. It was her laugh that made it right. She gave my brothers and sisters a copy for Christmas. My older brother had tears in his eyes. Everyone exclaimed: “I never knew that”. 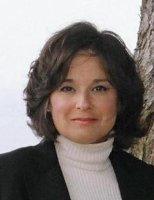 Now I have a book more treasured than any I have written. I learned a lot about my mom and I realized why I create fictional women of courage and conviction, strength and curiosity, intelligence and, most of all, spirit. It’s because, all this time, I’ve been writing about my mother.