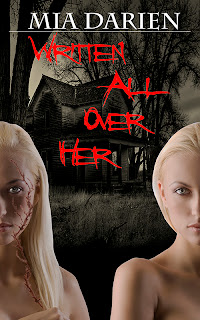 Can you give us a brief overview of your latest book? Is it part of a series?
My latest book is "Written All Over Her," which is the fourth full book in my Adelheid series. It follows Detective Nykk Marlowe, who is a woman with a traumatic past and the scars to show for it, literally. She has managed to stuff her past back for many years, but when the book starts, something happens that brings it all slamming to the forefront and we follow her as she deals with that professionally and personally.

Do you have a favorite character?
In the whole series, I'd definitely say Dakota. We really don't see her in book four, but she is the narrator of book two and the short story "Family Matters," as well as appearances in one and three. She's strong, physically and mentally, a total grouch, sarcastic to everything. I've been told that she says all the kinds of things I think but am too nice to say. This might be true. I admit to nothing.

Have you ever had a minor character evolve into a major one? Did that change the direction of the novel at all?
Madison. She was written as a secondary character in the first book in the series, and, after release, was met with surprising popularity. She never altered the direction of a book, but now she makes sure she appears in every one and she has her own short story, "Cats & Dogs." She might even get her own book down the line, if I can make the idea work.

What factors influenced your decision to self-publish your book(s)?
Well, you could say I'm a control freak... but really, I tried the traditional route for a long time and my rejections--when I got personalized replies--never said I had a bad story or it was badly written. It was always that it was a good story, but it just didn't fit what they were looking for at the time. After a while, you get tired of not hitting the right story to the right editor at the right time, so I started looking around and decided I liked the idea of controlling my own destiny. In this self-publishing gig, if I fail, it's on my head. No one else to blame. But if I succeed? It was because I worked my butt off, and I earned it.

Do you outline your story or just go where your muse takes you?
Oh, I totally outline. I've tried writing stories "by the seat of my pants" and it just never, ever works. The story stalls out and never gets done. That doesn't mean my outlines are set in stone. They change depending on how the story goes, but I need that starting frame work if I want to finish it.

What have you’ve learned during your self-publishing journey?
That there are a lot of fantastic people out there, and a lot of really crazy people too. Sometimes, they're one in the same! But no, I've met some great people and read some great books as I've gotten into the "indie" community. Otherwise, I've learned what it means to be tenacious and to be brave.

Do you find it difficult to juggle your time between marketing your current book and writing your next book?
Yes! Right now, marketing is winning, but I hope that'll change soon cause I have a lot of writing to catch up on!

What advice would you give a new author just entering into the self-publishing arena?
Do you research, and be ready to work. This is not "the easy road" and it shouldn't be. You're taking on the task of making your book ready for release. I'm not one of those that says the editing has to be sparkling. I've read too many badly edited books from Tor and such for that, but make sure you at least had some people read it; that its story is strong and not just gasping with plot issues. Have *some* editing done so its readable, and make sure it's formatted well! Cause there's nothing worse than not being able to read a story that might be good cause it's all over the place. Don't just slap your book out there and then wonder why it's not doing well. It takes time, and it takes dedication. So make sure you give it both, and you'll do fine. 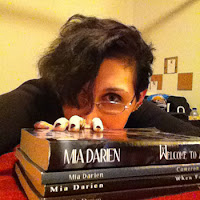 Besides writing, do you have any other passions?
I'm a very passionate person, so yeah. My husband and son, first off. My small group of close friends. Reading. I used to be very passionate about my drawing and dancing. Those have kind of fallen off, but I'm working on getting back into it.

What’s next for you?
The sky remains the limit! There are a lot more books on their way, because Adelheid has so many more stories to tell, along with my other series and that epic fantasy I've wanted to write for forever, lol. If you could see my stack of story folders, you know that I'm far from done. And I'm excited about all of it.