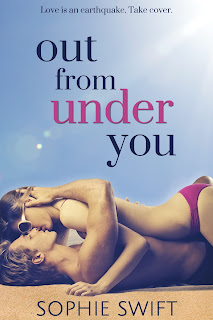 Where did you get the idea for OUT FROM UNDER YOU?
I think the idea came from two different fascinations of mine: relationships between sisters, and the complexity of infidelity. My sister and I have always had a complicated relationship, something I wanted to explore in this book. But also I’ve always enjoyed books that blur the line between right and wrong when it comes to infidelity. So I set out to write one of those.
Why did you choose to write the book from alternating points of view (Grayson and Lia) and did you find one easier to write than the other?
You know, the book didn’t start out that way. Early on in the first draft, it was just Lia’s narrative. But for some reason, Grayson kept bugging me. Like he was in the back of my mind, poking me with a stick, wanting to be heard. So I sat down, started a new document, and wrote a scene from his point of view, just as an experiment. I ended up loving his voice so much, I simply had to find a way to work it into the story. After the decision was made to alternate points of view, I could almost see him smiling smugly, going, “See, I told you!”

In terms of who was easier, Lia was definitely more straightforward. Because she’s more like me. But Grayson was definitely the most fun. He surprised me so many times. So I think I looked forward to his voice the most.
Which fictional character do you have a secret crush on?
Any character played by Liam Hemsworth. God, that man is sexy. I pictured Grayson whenever I was writing his point of view. As a daily little treat to myself. J
What scene in the book is your favorite?
OH! That would definitely be the schmexy restaurant kitchen scene. That scene was not in my outline. It just kind of popped into my head as I was writing and I had to race to get it down fast enough. I don’t want to give anything away, but let’s just say there are some fairly creative uses for tomatoes that I still need to try out myself. J
If you could have dinner with one of your characters who would it be?
Um, Grayson! No contest! Not only is he smokin’ hot, he's also a bit of a food connoisseur, so he would pick the best restaurants ever for our date. And since I know everything there is to know about him (because I've been inside his head) I would know all the best ways to seduce him. *Rubs hands together mischievously*

What’s up next for you?
I’m super excited about tackling book 2 in the Smart Girls Finish First series. Book 2 will be told from Alex’s point of view, Lia’s older sister. She was a really fun character to write as the antagonist in this book so making her the protagonist in the next book will be an entertaining challenge, I think! The rest of the books in the series will all feature young women in the Smart family. And since Alex and Lia’s father has four brothers, all with daughters, there are lots more stories to tell!


GIVEAWAY: The author is giving away a digital copy of the book. Leave your email address in the comments for a chance to win!