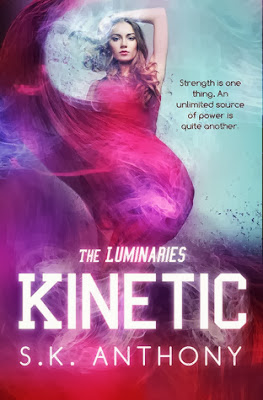 Synopsis:
Being strong is one thing. Being an unlimited source of power is quite another.

Genetically altered by the Organization, Annie Fox takes down criminals CIA-style with her luminary strength. With nothing to mend but her broken heart, she is relentlessly pursued by her boss Derek Lake. Just when Annie is about to give him a chance, her ex-husband unexpectedly comes out of hiding.

A wanted man, Nick Logan is a cold-hearted murderer who is considered enemy number one, and orders are clear: kill on contact. He is more powerful than ever and threatens the lives of those she holds most dear. His plan? Get his hands on Annie and use her Kinetic energy to destroy them all. When Annie finds herself with an opportunity to end him, she pauses, horrified by the scars covering the face she once loved. A split second that will cost her everything…

AUTHOR BIO
S. K. Anthony is a writer, a reader and a make-stuff-up-er who lives in New York with her husband and toddler twins. She is a wine connoisseur, which just really means she knows she loves it, and a caffeine addict. When she isn’t busy with her family she finds herself being transported into the world of imagination. Well, either that or running away from spiders…she is convinced they are out to get her!

EXCERPT:
I knew what I had to do. Orders were clear… KILL ON CONTACT.
The thing is, it was Nick.
Before I knew what I was doing, I'd released my hold. He got up and rubbed his mouth.

“What did I tell you about giving second chances?”

“Honey, you are so wrong! I wouldn’t even blink an eye, no pun intended,” he smiled. “Next time you won’t be so lucky. If you ever get the chance again, take it.” He shoved me down and gave me a hard kick in the ass. He started to leave but turned instead, his smile still plastered across his scarred face. “If you can.”

I watched him leave and took a deep breath. I had to give this some thought. I wondered if there was any excuse I could come up with that the Organization would believe. I was going to be in so much trouble. And it was possible they would even strip my abilities away. Although my job could be mentally exhausting, I knew that, deep down, I couldn’t give up what made me, me. I was a badass, I liked using my extensive training to bring down the bad guys of the world, and what had I just done? I'd let the worst of them walk away. I came into this Organization to serve a purpose, and I had never regretted it. Until now.

Nick had taken advantage of all the knowledge he’d gained when he was part of the Org. He was guilty of kidnapping, attacking government buildings, killing a lot of people, and was considered enemy number one for all Luminaries. But while I had no respect left for him, I couldn’t hate him. Not like the rest of them did. This was the man with whom I had exchanged wedding vows, the man who was once my whole world, and he had to be taken down. But he still had enough power over me that I'd let him go. Stupid heart. I never wanted to be one of those girls again, the ones who live for love or die for it. No, love no longer had any place in my empty chest.

The problem was, I'd found my heart staring at me through one eye, and I'd lost my shit.
One day, I hope you know this.”