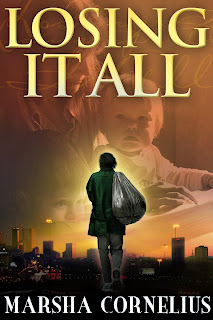 Can you give us a brief overview of your latest book?
Losing It All tells the story of Frank and Chloe. Frank was a POW in Vietnam, and when he got out of the war, he was too damaged mentally and physically to work, so he's been living on the streets of Atlanta for the past 12 years. Chloe has a husband and two small children, but when hubby takes off, she can't manage, and ends up in a homeless shelter. Their lives intersect at a soup kitchen.

Do you have a favorite character?
I loved Rick from my first book, H10N1. He's a bad boy, and he's sexy, but he's not a typical macho jerk. I guess he was my dream obsession. And when I finished that book, I missed him for a while. 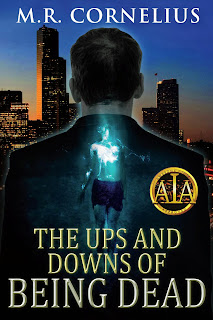 Have you ever had a minor character evolve into a major one? Did that change the direction of the novel at all?
Maggie, in The Ups and Downs of Being Dead, started out as a minor character, but she grew quite a bit during rewrites. She became the main character's conscience. Even though he initially thinks he's just an old bat, he learns a lot from her over the years.

Did you try the traditional route to publishing, i.e. querying agents/publishers?
Yes, I tried the traditional route. I had an agent, and she was terrific. She loved my book, (H10N1) and tried her best to find a publisher, but after a year we both agreed that I should try the indie route. I'm glad I did, because the book was timely, and needed to get out there. It's a post-apocalyptic thriller, and if I'd gone traditional, the book would just be coming out this spring.

Do you outline your story or just go where your muse takes you?
With H10N1, I just blathered away at the computer. Anytime an idea came to me, I threw it into the stew. But that sloppy writing took two go-rounds with an editor before I had it whipped into shape.

Now I outline. That's not to say that the outline doesn't change, but it gives me a guide. I got halfway through my next book, rethought were I was going, redid the outline, and now I'm back on track.

Did you hire an editor to review your manuscript before publishing?
I definitely use an editor. And anyone who doesn't use an editor, isn't serious about the craft. I figure if top-selling authors like Stephen King and Karin Slaughter use an editor, what makes me think I don't need one, too.

Do you find it difficult to juggle your time between marketing your current book and writing your next book?
Managing my time is difficult. I'm writing fulltime, so I'm at home, and the distractions are too numerous to list. I do my best writing in the morning, so I've relegated marketing to the afternoons and evenings.
I write every day, even weekends, but some days are more productive than others. There's nothing worse than reading what you wrote yesterday, and deciding it's 90% crap.

What advice would you give a new author just entering into the self-publishing arena?
Get a professional to look at your final manuscript before you publish. I don't care how helpful your critique group is. They're too close to your book to see the flaws. And please don't ask friends or family to read your book. They will tell you they love it, even if it's the worst garbage they've ever read. I'm sure you would much rather hear about the book's flaws from an editor, than from reviewers on Amazon and Goodreads.

Besides writing, do you have any other passions?
I've really gotten into fitness. Now that I've face the fact I'm no longer young, I need to take care of this body, or it's going to let me down. I do yoga and Pilates for core strength and balance, and lift weights once a week, hoping to keep osteoporosis away.

I'm a lot more conscious about what I eat, too. I can't burn off a Krispy Kreme donut like I used to. Sure, I still love cookies and crusty bread, but it's all in moderation now.
Posted by Debra L Martin at 8:00 AM