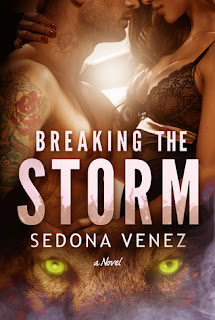 I instantly recognized the heavy, sensuous beat of the music as it thumped and echoed throughout the room. Damn those two. They picked Knox's hit single for me to dance to. I blew out anxiously, feeling like I was about to throw up. Damn, maybe I should just concede victory to Knox and go home with my tail between my legs. That's when I saw Knox with his wide muscular back deliberately turned away from me, in what I knew was an intentional you're not even worth paying attention to slap in the face. Okay, Mr. Gunner, it's time to wipe that fucking disdain from your face.
“Let's get ready to rumble… New York style,” I mumbled under my breath as I paraded about a bit before strutting my stuff. Releasing all of the tension, my body relaxed, fully taking in the magnitude of the utter power and sexiness of my captive audience. Unleashed dominance pulsed around me. Yep, I could do this. It was Seduction 101, and from the lustful hooded stares of the men that were now sitting up at attention, they were very interested in seeing exactly what I brought to the freaky boardroom.
Licking my lips seductively, I flipped my hair, strutting forward with a deliberate sway to my hips. Chest out. Head up. My gaze swept to every man as a hush filled the room. Knox turned around, giving me a blank stare.
The lights flashed while the music wove a hard rhythm around me. I loosened the tie, running it through my hands seductively, then over my shoulders. A man with sexy black hair peppered with gray at the temple beckoned me over with a nod. Placing one foot directly in front of the other, I strutted over, proud and sexy.
Twirling the tie in my hand a couple of times before leaning forward with my stomach in and ass out, I swung the tie around his neck to draw him close. Gracefully swaying my hips from left to right as his eyes followed my hips in perfect synchrony. Releasing my grip on the tie and with a simple lift of my leg, my heel dug into his wide, muscular shoulder. His eyes dilated, turning a light yellow. A tiger-shifter. Bumping my hips sensually, I glanced at the wide-screen. The bid was at $80,000.
“Absolutely beautiful,” he said with a sexy Texas drawl. He pressed the button, moving the highest bid to $110,000. “You, I definitely want.”
“Tiger, you might be asking for way more trouble than you can handle,” I responded with a wink before digging my heel deliberately farther into his broad shoulder, knowing that the pinch of my heel would give him what he wanted—pain. A growl rumbled deep in his chest, his hands clenching his glass. Just like I thought, the tiger was into pain. He pressed the bid button again.

Synopsis:
I wanted Knox. There was no need to deny that fact.

Knox was the type of guy you gravitated to, who stood out in the crowd. It wasn’t just his classically good-looking features and perpetual five o’clock shadow. It was his raw energy that entranced me, that made me feel like a giggly, fumbling high school girl, happy to be in his presence.

Yes, there’s no denying it, front man Knox Gunner was a sexy badass.

It didn’t matter that he initially thought I was some bored, rich girl trying to live out some wild fantasy of being with a starving musician. It was uncomplicated and that’s what we both wanted. At least that’s what I convinced myself. I wasn’t ready to admit to myself that my feelings for Knox were getting dangerously deep—waiting to lay siege on my heart. I was falling for him… and this was dangerous. The rules were clear: falling in love would obligate me to expose what I truly was, setting in motion his slow march to death.
Goodreads: https://www.goodreads.com/book/show/17800664-breaking-the-storm?ac=1

TLC is a NYC girl (go Brooklyn!) and is obsessed with books. She also has a borderline unhealthy obsession with her iPad. Her favorite books… anything with rockers, hot alpha men and wolf shifters! Her true love for writing blossomed when she began to write New Adult and Adult novels with romance, music, and sexy men as her alter ego "Sedona Venez".

Find me on pinterest to get some great Breaking the Storm inspiration!! http://www.pinterest.com/tlcauthor