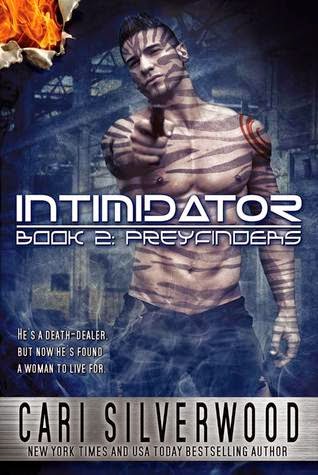 Synopsis:
This is Book 2 in the new Preyfinder series.
Book 1, Precious Sacrifice, is currently in the anthology, Kept.
Willow has her hands full scraping out a life in a grungy neighborhood where drugs and crime are the norm. Life is hard, but it’s about to get harder. Being transformed into a sexual pet for an alien warrior may be her only way out.
But Stom, the man she’s been awarded to as a battle honor, has no use for a female, not when his heart is still in a million pieces.
Though the need to be Stom’s mate is overwhelming her, mending his heart isn’t going to be enough. His enemies are searching, looking for the women who are more than they seem, and she’s in their hands before she discovers she’s more-than-human.
Sometimes it sucks to be a chosen one
Goodreads: https://www.goodreads.com/book/show/21522121-intimidator?ac=1

And...in this real world, she has a lovely family in Australia, with the prerequisite teenager who dwells in the dark bedroom catacombs...a husband who raises eyebrows when he catches glimpses of what she writes, and a menagerie of other animals barking, meowing, and swimming about the place.

Excerpt:
Stom has been observing Willow at a pub, waiting for his chance to kiss her, so he can claim her.
*****
He’d follow after a few minutes, see where she went. Then Stom’s warrior-enhanced hearing picked up a small shriek, far away, but close enough to be just outside this building.
Her.
As he ran for the door behind the bar, hurdling the counter and sweeping glasses and bottles to the floor with the tail of his coat, he left behind a thunder of smashing glass. People yelled for him to stop. But out of all this, apart from his anxiety over her safety, his one other concern was that he’d recognized that cry. Anyone else he’d seen here tonight could sing an entire song and he’d not know who it was.
Why was this so?
Be inconspicuous? So he guessed that meant he shouldn’t use the twin 357 Magnums he wore in a double underarm holsters, or the sub-compact Heckler & Koch MP5 slung at his back beneath the coat, or the... Pity. He could make such a mess with all these neat human weapons.
On his way through the kitchen, he snatched up a bunch of knives and forks and stuck them into a pocket.
He thrust open the back door and counted back the number of spectators he’d run past. Five, minus whoever was outside. It would do. He could hear the two men somewhere around the corner murmuring threats at Willow. He growled and stalked forward. If he killed these two, maybe that meant he didn’t have to count them?
The brick wall of the pub dog-legged to the right and he followed it into a short alley. At the far end, past a half-open dumpster, was a quiet street with a warehouse and a few cars. One insect-shrouded streetlight shed meager light. He kept going past the dumpster and found them.
They had her backed into a double door, with Turf holding her wrists above her head. Skull-head had his palm over her mouth and was shoving her T-shirt up above her bra. She was trying to kick them and screaming muffled curses. The man removed his palm from her face long enough to slap her hard, once.
A rage like he’d not felt for eons shrieked in and tore his notions of serenity into scrap-sized pieces.