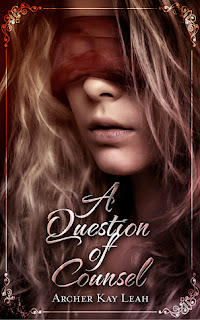 My latest book is A Question of Counsel, a F/F fantasy romance. The main character is Aeley Dahe, a political leader in the fantasy republic of Kattal. Aeley finds herself in a bit of a bind: not only does she have to deal with an imprisoned brother sullying their family name, but she’s been entered into a contract marriage with a questionable family. Enter Aeley’s scribe, Lira, who’s also daughter in the same family Aeley’s been told to join – except they consider Lira a disgrace. This is the story of how they hook up, at a time when Aeley’s reputation is being tested.

A Question of Counsel is the first standalone book in my series, The Republic.

Have you ever had a minor character evolve into a major one? Did that change the direction of the novel at all?
Absolutely! Aeley is a minor-to-major, in a way, born from a short novella I wrote for an anthology called Won’t Back Down.

The more notable is Mayr, Head of the Guard for Aeley’s estate and her best friend. Originally, Mayr had a teensy part at dinner in A Question of Counsel. But as the scene progressed, Mayr’s part grew. He then showed up in later scenes in a big way. As if that wasn’t enough, after I received my editor’s suggestions, I expanded Mayr’s part even further. It was unexpected, but valuable. His presence gave Aeley a chance to show certain facets of her character. With Mayr, she’s candid and more open. Mayr also influenced the relationship between Aeley and Lira – he encouraged them and provided certain opportunities for them to be alone. He’s a special kind of guy… who’s now getting his own book.

What factors influenced your decision to go with a particular agent or publisher?
Previous experience with the publisher, an inspiring submission call, and appreciation for the publisher’s mission, vision, and brand.

If you used a graphic designer/publisher’s designer, how involved were you during the creative process for your cover?
I provided ideas about what I’d like to see for a cover and suggested stock photos I felt represented the story. After that, it was in the hands of Natasha Snow, a cover designer hired by my publisher. In the end, the photo used was the one I suggested as a first concept. Natasha took that photo and made it into a gorgeous cover.

What is your writing process? Do you listen to music or do you like silence?
Music is an integral part of my writing process, from start to finish: all stages of conception, planning, writing, and editing. Almost every moment of the storytelling process has music associated with it, the visuals and character feeding off the tones and feels of sound. It’s more than a noise-blocker or distraction: I use it to sustain atmosphere and fuel emotional connections.

The rest of my process is pretty simple. Each session, I sit down with my laptop, a fully-stocked playlist, my outline, and a clear idea of what I need to accomplish for the scene(s). I don’t always lay scenes down in chronological order, but work inside the framework laid out in my document. Sometimes I write the scene that speaks to me the most at that moment. If the muse is banging on the door, might as well answer it!

Do you outline your story or just go where your muse takes you?
In the last couple years, I’ve adopted outlines, some of which are insanely detailed and long. But even then, I always allow for the free-flowing element. Sometimes it’s just best to give into what you don’t plan. There are times when what I’ve outlined doesn’t end up on the page. That’s okay, because the result often ends up being better, more organic, and interesting.

Besides Amazon, are there any other sites where your books are for sale?
Smashwords, All Romance eBooks, iTunes, Kobo, and more than a dozen other online retailers (some I’ve never heard of before!) As my publisher would say: “All major retailers”.

Besides writing, do you have any other passions?
I love science, especially the biological, ecological, and environmental sciences. I’m also a huge geek when it comes to psychology and behaviour. On the crafty side of things, I love sewing by hand, particularly period costumes and quilts.

Some fun facts about you, which do you prefer – dogs or cats? Chocolate or vanilla? Coffee or Tea? Talk or Text? Day or Night?
Cats. Chocolate. Neither coffee nor tea – both make me nauseous. Text. And night, always night!

What’s next for you?
I recently signed the publishing contract for For the Clan with Less Than Three Press, who also published A Question of Counsel. For the Clan is a dystopian-fantasy-science fiction romance involving a M/M/F poly relationship. The main character, Roan Lee, is a member of a magical subspecies of human who has been held captive by the government for years. When Roan escapes only to come across his former lover, Jace Ama, he’s really thrown for a spin. Especially since Jace is married and leads one of the nomadic clans in what’s left of the Canadian wilderness. It’s a story of difficult choices, beautiful surprises, and finding life after it’s been ripped away.

Synopsis:
Life hasn’t been easy for Aeley since she arrested her brother, and her role as a political leader leaves her feeling isolated and lonely. Days before her brother’s trial, she meets Lira, a quiet and modest scribe who makes Aeley want more than just a professional relationship.
When she attends the trial and leaves with a marriage contract, Aeley doesn’t know what to do. She must choose one of two brothers, marrying into a family she doesn’t know. Then she discovers that Lira is part of the same family–a sister to Aeley’s suitors and the family’s disgrace. And not at all opposed to an intimate relationship.
Except random acts of violence against her people test Aeley’s ability as a leader, and a web of lies and deceit threaten not only her chance at happiness, but her life…

AUTHOR BIO:
Archer Kay Leah was raised in Ontario, Canada, growing up in a port town at a time when it was starting to become more diverse, both visibly and vocally. Combined with the variety of interests found in Archer’s family and the never-ending need to be creative, it has been this diversity that has inspired Archer’s love of toying with characters and their relationships, exploring new experiences and crazy situations.

Archer started writing stories at age six and became “that kid” with their nose in the books and a pen in their hand, pursuing the challenges of writing novels at age thirteen and conquering the dread of poetry at fifteen. Archer most enjoys writing speculative fiction and is engaged in a very particular love affair with fantasy, especially when it is dark and emotionally charged.

When not reading and writing for work or play, Archer is a geek who has too many hobbies, keeping busy with other creative endeavors, a music addiction, and whatever else comes along, especially if it is in technological form. Archer lives in London, Ontario with a same-sex partner and their cat.