#Excerpt: MORE THAN ONCE by Elizabeth Briggs 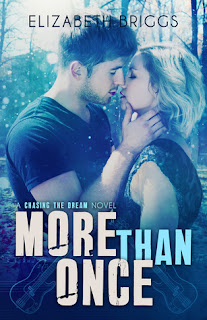 Excerpt:
“Look Andrew, you’re a ni—”
“Wait.” He held up his other hand. “Just stop right there.”
I blinked. “What?”
“You’re about to say I’m a nice guy, but you think we should just be friends, right? Believe me, I’ve heard that line more times than I can count.”
Shit, that was exactly what I was going to say. “Um…”
Without hesitation, he pressed me against the side of my car, his fingers sliding to the back of my neck and into my short hair. I gasped and heat flared between us, so hot I was sure it was melting every inch of snow in the entire parking lot.
“You didn’t think I was ‘nice’ that night, did you?” he asked, his voice low, his eyes locked on mine.
“No,” I whispered. Memories of that night still haunted me in the best way. I’d lie in bed when I couldn’t sleep and slide my hand between my legs, remembering the way he’d pounded into me, the way he’d held me down, the way he’d been rough and demanding and completely in control. We’d given each other exactly what we’d both needed, but I never imagined he would want anything to do with me after that. Because in the morning, we’d both gone back to who we were: the good guy and the bad girl.
But now Andy, the vulnerable, broken-hearted nice guy I’d met before, had vanished, and in his place was Andrew, who was bold, assertive, and really fucking sexy.
“One date,” he said, his mouth so close to mine I could feel the words against my lips. “One date and then you can tell me to get lost. But give me a chance first.”
I was painfully aware of every inch of Andrew’s hard body pressed against mine. He seemed…bigger than I remembered. More muscular. I could tell from the way his collared shirt hung from his frame, and I was tempted to rip it open and see exactly how much he’d changed underneath. Not that I’d had any problem with his body before—but now he had a confidence to him that was all new, and he wore it damn well.
The Becca of a few months ago would have grabbed him and kissed him senseless, then suggested they go back to his place. Actually, the Becca of a few months ago had done exactly that. But now I was trying to be good and that meant not making out with guys I barely knew in the middle of parking lots.
Ugh. Being good was no fun at all.
“One date,” I said. “But don’t expect anything more.” 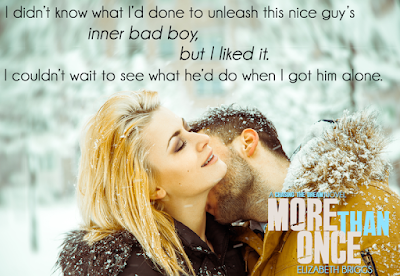 Synopsis:
Special release week price of $0.99! Get this stand-alone holiday romance now before it goes up to full price!

She’s trying to be good. He loves it when she’s bad.

Andrew West is done being the nice guy. After a marriage proposal gone wrong, he's started over in a new city and he's never risking his heart again.

Becca Collins is done being the bad girl. After quitting the band she played bass for, she's going to prove to her family that she's really changed.

When Becca's dumped by her boyfriend and fired from her job on Christmas Eve, all seems lost, until she runs into a former one night stand--Andrew. To impress her parents, Becca convinces him to pretend to be her perfect boyfriend for their holiday dinner.

After Andrew shows Becca he's all bad boy in the bedroom, neither wants to pretend anymore. But when Becca's invited to rejoin her band for a show and Andrew's forced to face his ex, they both wonder if they're ready to take a leap again--or if they're doomed to fail in life and love a second time. 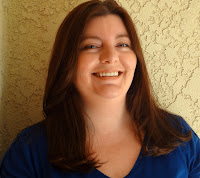 AUTHOR BIO:
Elizabeth Briggs is a full-time geek who writes books for teens and adults. She graduated from UCLA with a degree in Sociology, currently mentors teens in writing, and volunteers with a dog rescue group. She's the author of the Chasing The Dream romance series and the upcoming young adult novel Future Shock. Elizabeth lives in Los Angeles with her husband and a pack of fluffy dogs.