#Excerpt: BEFORE GOODBYE by Mimi Cross 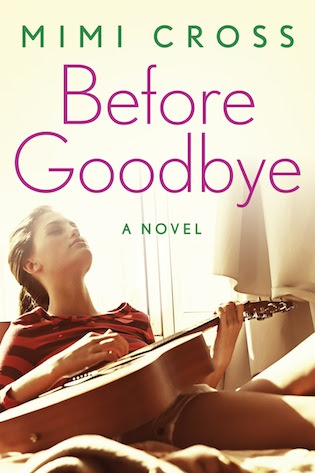 Synopsis:
Music means more than anything to high school student Cate Reese; it’s also what unites her with Cal Woods. Devoted classical guitar players, Cate and Cal are childhood friends newly smitten by love—until a devastating car accident rips Cal out of Cate’s life forever. Blaming herself for the horrific tragedy and struggling to surface from her despair, Cate spirals downhill in a desperate attempt to ease her pain.

Fellow student David Bennet might look like the school’s golden boy, but underneath the surface the popular athlete battles demons of his own. Racked with survivor’s guilt after his brother’s suicide, things get worse when tragedy darkens his world again—but connecting with Cate, his sister’s longtime babysitter, starts bringing the light back in.

As Cate and David grow closer, the two shattered teenagers learn to examine the pieces of their lives…and, together, find a way to be whole again.

The sheet music perches on the black metal stand, a stack of white flags begging for surrender. But I will not. The music itself looks like a war zone: Pencil strikes are everywhere, the pages filled with casualties—discarded fingerings, interpretive markings. Added, then savagely crossed out. I am trying desperately to get the changes right, Cal’s changes.
The upcoming concert is my inspiration to get up in the morning. Making these changes is my homage to Cal, my connection to him.
But the Brooklyn gig . . . that show was for us. I need to cancel, yet can’t make the call.
There are so many people I can’t seem to call, my friends in the city—some who knew Cal. A few have called me, but I’m not sure that it matters. They all seem a lifetime away.
Besides the addition and blackened subtraction of musical direction, there are comments written in my music: maybe I’m just a crazy person with this boy in my head.
Cal Woods is not the only guy on my mind.
When Mr. Close finally showed today, he acted like he didn’t know why David and I were there. He probably just didn’t want to punish David for something everyone wanted to do, and he didn’t want to punish me because he doesn’t even know who I am. Half the time in PE I’m like a ghost. Or maybe Close knew I didn’t deserve a detention. Yes, I served a volleyball at the back of Dee’s head, but it couldn’t have hit her that hard, I can’t spike for shit. Of course the volleyball incident was right after I went off on her for telling me not to call Laurel. That was a big deal—to me, but not to her. So neither of these things should have sent her crying to Close. I think she was just pissed at me because of that guy she was talking to earlier.
I haven’t been able to go into the cafeteria for lunch since the accident—too many people, too many eyes on me. Hardly anyone at school knew Cal, but the fact that I was in the car with someone who died in an accident on Chapel Hill Road means that now everybody knows me.
So I’ve been going to the library with my lunch, when I remember to bring it, but I didn’t quite make it today. I couldn’t. Couldn’t stop crying.
Laurel heard I was having a meltdown in the girls’ room and came looking for me. We’d just taken seats outside on the stone wall surrounding the patio when Dee appeared at the far end.
“Dee.” Her name was a small noise escaping my lips, a sound not at all like Laurel’s secret sharing whisper-hiss, but more like choking. Dee was the last person I needed to see.
Laurel waved a hand dismissively. “Don’t worry about her. You’re all pale. I’m going to get you some food.”
I nodded, then glanced back at Dee. But she’d already turned away, calling to a tall boy with dark hair standing at the edge of the woods that border the closest playing field.
Even with everything I was feeling, as the boy approached the patio, I was struck by his looks—he had that kind of face. Plus, he seemed familiar for some reason. But it wasn’t his face or the odd feeling of familiarity that got my attention. He was carrying a guitar case.
I watched him, watched Dee bum a cigarette. But when she started using it to gesticulate, jabbing it angrily in his direction as she spoke, he appeared to stop listening. His eyes flitted from face to face—Till they landed on mine.
One summer the Ridgeways took me to Montana, to a dude ranch called Triangle X where we rode horses all day. Out West the sky is somehow higher and wider, bluer.
Even from where I sat on the wall, I could see the boy’s blue eyes. They reminded me so much of that sky . . . I couldn’t look away.
Dee followed his gaze and shot me a cyanide smile, then tugged on his arm. But even as they were walking away, the dark-haired boy’s eyes held mine, his head swiveling to keep the connection. There was a slow-motion feel to everything as my head turned, too—
But then Laurel returned, plopping down on the wall, and time snapped back to its normal tempo. A minute later, I’d forgotten all about the boy. But maybe Dee hadn’t. She’s with Laurel now, but who knows. Maybe she had a thing with this guy.
I picture her jabbing her cigarette in his direction. Obviously, she knows him well.
So, right, I bet that’s what it is. Not the volleyball, the boy. Then again, Dee would find a way to hate me no matter what. No one has ever really hated me before, except . . . That night, the night David insisted on talking about. Wasn’t what happened just another kind of hate?
My left hand travels automatically up and down the fretboard, fingertips splayed like spider legs, running scales again and again. The fingers of my right hand dutifully hop from string to string— but these exercises don’t absorb me, not fully, not now.
Closing my eyes, I concentrate harder. Hammer-ons, pull-offs, be stiller than still. Classical musicians must not move, must not let our bodies express. The music expresses. We are merely the vehicles for the composers. For Saint Cecilia, for the Muses. Maybe, even, for God.
I do not play an instrument; I am the instrument. I serve.
My fingers move up and down the fretboard, skip, skip, skip across the strings . . .
Silently, a window in my attention span slides open. At first I notice nothing, too busy playing . . . But then a dark intruder—a recent memory—slips over the sill like vapor. 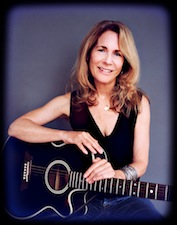 AUTHOR BIO:
Mimi Cross was born in Toronto, Canada. She received a master's degree from New York University and a bachelor's degree in music from Ithaca College. She has been a performer, a music educator, and a yoga instructor. During the course of her musical career, she's shared the bill with artists such as Bruce Springsteen, Jon Bon Jovi, and Sting. She resides in New Jersey.