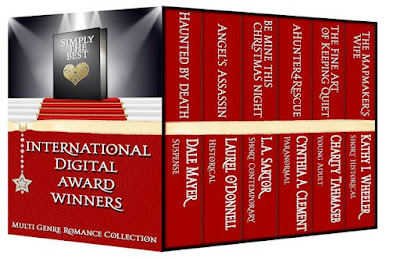 He hesitated.  He didn’t want her to fear him.  Would she condemn him now for his violence?  The silence stretched.  Finally, he turned to her and his breath caught in his throat.

She stood in middle of the forest, bathed in a pool of moonlight.  Her blonde hair, loose from any constraints, fell to her waist in thick waves.  Her back was straight, her tiny body alluring and curvy and delectable.  But it was her eyes that captured his attention.  He saw no fear in her eyes.  It was concern.  Had he mistaken fear for concern?

Damien had never felt such an overwhelming need for anything in his life.  He trembled with his want of her.

A swirl of emotions played over her face.  Concern, regret, helplessness.

“I will never leave you,” she finally confessed and tears entered her eyes.

Damien came toward her then, like a tumultuous storm cloud.  “You don’t know what you are saying,” he warned in a savage whisper.

Aurora did not run for cover; she did not shrink from his approach.  She stared up into his face with those damned clear orbs.  And for the briefest of moments, Damien saw himself reflected as she saw him.  A hero, a good man.  A man worthy of all he could attain.

He stood before her, stunned.

Damien grabbed Aurora’s hand in one hand, and drew his sword in the other.  He watched the group of men approach through the forest, clumsily maneuvering their steeds through the tight trees.  He pulled Aurora behind him.

These men were no brigands.  They wore heraldry, and while Damien couldn’t be sure, he suspected they were from Acquitaine.

As they drew closer, his suspicions were confirmed.  One of them called out, “Lady Aurora!”

Damien refused to relinquish her.  For just one moment, she had been his.  And it had been the most glorious moment of his life.

BLURB:
This collection of multi-genre romances features winning novels from the International Digital Awards, including historical, suspense/thriller, short historical, contemporary, paranormal, and young adult. Simply the Best of all worlds!

In her last summer before college, an innocent camping trip ended in a friend’s disappearance…and destroyed her life.

Angel’s Assassin ~ Laurel O’Donnell
When Damien enters Aurora’s life, tempting her with promises of dark passion and forbidden lust, he threatens to tear her peaceful world apart with shadowy secrets of his own.

Be Mine This Christmas Night ~ L. A. Sartor
At Christmas, finding love and a family seems even more possible…unless you’re keeping a secret.

A unit of elite alien warriors, known as Hunters, crash lands on earth and their leader is torn between getting his men to safety or protecting the human woman he has bonded with.

No one expects the girl who has mastered the art of keeping quiet to join the speech team. But Jolia does. When a crush-worthy rival offers to coach her in secret, she can't say no. But secrets have a price, and this one might cost Jolia everything.

The Mapmaker’s Wife ~ Kathy L Wheeler
In the midst of his worn-torn country, love posed the greater danger.

A flippant proposal and an attack on her person finds one young woman married to the mapmaker who only needs someone to take control of his ungovernable child. Feelings quickly shift into something less platonic and when the enemy gains vital secrets, her suspicions land her in jail.

This multi-author boxed set will be sold for $0.99 cents.

L.A. Sartor is a bestselling, award-winning author. She began telling stories around the age of 4 when her mother, at L.A.’s insistence, wrote them down and L.A. illustrated them. As an adult, she writes suspense and action-adventure novels with a dash of romance, and screenplays—she's had a contracted adaptation!  She lives in Colorado with her husband whom she met on a blind date.  L.A. loves to travel and thinks life is an adventure and we should embrace the journey.
Website -http://bit.ly/Msu6J8
Facebook  -http://on.fb.me/NxXQPL
Facebook Author Page -http://on.fb.me/MUU9HK
Twitter  -https://twitter.com/LesannSartor

Laurel O'Donnell is a best selling author and has won numerous awards for her medieval romances, including the International Digital Award and the Holt Medallion Award.
Website -http://www.laurel-odonnell.com/
Facebook -https://www.facebook.com/LaurelODonnell.author/
Twitter -https://twitter.com/laurelodonnell

Charity Tahmaseb has slung corn on the cob for Green Giant and jumped out of airplanes (but not at the same time). She’s worn both Girl Scout and Army green. These days, she writes fiction (short and long) and works as a technical writer.
Website/blog -https://writingwrongs.wordpress.com/
Facebook -https://www.facebook.com/charity.tahmaseb
Twitter -https://twitter.com/geekgirlx2

Cynthia Clement is an award winning author who began writing when she was a teenager. Her novels reflect her love of romance, strong honorable heroes, and suspense intertwined with the intriguing and unexplained.
Website -http://www.cynthiaclement.com/
Facebook -https://www.facebook.com/Cynthia-A-Clement-Author-124053354459215/?ref=hl
Twitter -https://twitter.com/CynthiaAClement


a Rafflecopter giveaway
Posted by Debra L Martin at 4:00 AM