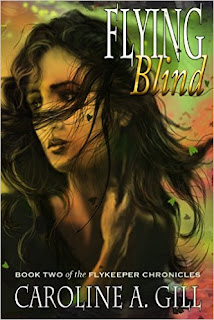 Can you give us a brief overview of your latest book? Is it part of a series?
It is the second book in the Flykeeper Chronicles. After I finished Flying Away, the book itself felt complete. I had told Lani’s story from a lost, abandoned child through to her decision to take back her life from the callous men who stole memories. When she grew up and came into her own in Book one, it felt right.
But in reality, we all know that technology once invented is almost impossible to contain, a genie in a bottle with destructive and beneficial powers depending on the user. And while Lani thought winning the first battle was enough to set her free, all of her opponents and more are still on the board. Her life and all those dear to her will always be in jeopardy because of her knowledge about the memory stealing technology AND because she can talk to flies. That alone makes her valuable, endangering all she worked so hard to save in Flying Away.

Do you have a favorite character?
In the Flykeeper Chronicles, I have to say my favorite character is Eleanor, the younger cousin. Though she spent much of the first book in a memory-stealing induced coma, she is the kind of cousin that you adore and drives you batty at the same moment. I probably love her just because she speaks fluent pig latin. But also, Eleanor is the hope Lani carries: for a family of her own, for a future not broken by greed.

Have you ever had a minor character evolve into a major one? Did that change the direction of the novel at all?
I am pleased that both Enyo and Eleanor had a story arc in Flying Away, and that Lani continues to value Eleanor, protecting her cousin whenever possible. Both of Lani's cousins were fundamental to the first novel and continue to play foundational roles in the series. They share blood and bone, belief and wonder. Together, the two girls are a reflection of Lani's own struggle.

What factors influenced your decision to self-publish your book(s)?
I wanted more control and less gatekeeping than traditional publishing offers. That's why I chose self-publishing. I really wasn't aware of the stigma it carried for quite some time. Thanks to the internet and places like Amazon, the way we publish, what we read, and the voices we hear are widening. And the availability and production of books and music lets in a lot of trash, but also a ton of treasure.

If you used a graphic designer/publisher’s designer, how involved were you during the creative process for your cover?
I drew the cover myself using layers of sweeping orange, red and the glow of green. I drew the figure and the flies using a wacom tablet and adobe photoshop.
Part of the story of Flying Away, the first book in the series is Iolani's discovery of the magic of houseflies. The other factor is the use of memory stealing technology to drain away part or all of a person's mind. The light from that sinister tech is an eerie lime green. So I wanted that color on the cover. A housefly has vermilion eyes and iridescent blue green wings and body. Red and green are complementary colors.
With Flying Blind, Lani is older and surprised by her enemies when the only home she has is attacked. She failed to plan for that moment and is left to pick up the pieces.

What is your writing process? Do you listen to music or do you like silence?
For Flying Away, Flying Blind and Flying Free, I listened to the Guardians of the Galaxy soundtrack. A lot. And I listened to some of these:

Do you outline your story or just go where your muse takes you?
The characters write themselves. And then once I know them, I find their story. It is not normally where I thought it would be, and their desires are far more fascinating. I plot over several books to maintain consistency and to include hints of things to come. Meta plotting (looking at the overall skeleton of several books and then breaking down the individual novels) really helped make book two and three, Flying Blind and Flying Free feel knitted together.

Did you hire an editor to review your manuscript before publishing?
Back in 2012, I published a novel, my first and thought I didn't need an editor. I assumed wrong. We all have blind spots which make it impossible to clearly see our writing: our brains fill in the missing information of what we Meant to say.... And readers can't do that.  Editors have caught so many little mistakes, but also several rather big ones. I would have never seen those weaknesses. One of my first editors broke me of multiple exclamation points. Well, sort of.

What have you’ve learned during your self-publishing journey?
Kindness matters. Always.
It takes a village. Whether its readers, fellow authors, PAs, bloggers, or publishers, we all lift each other. Trust makes us stronger. And there is always a great deal to learn.
Try again. And again.
Find something new.
Watch what successful authors do and adapt to that strategy.
Put your head down and keep writing. Success doesn't normally come after one book. Write your heart onto the paper, the readers will come.

What kinds of marketing [twitter, facebook, blog, forums] are you involved with for promoting your book(s)?
I use twitter, facebook, free books, newsletters, and anthologies. It's important to help your readers find you. And in order to do that, you have to produce quality that shines.

Do you find it difficult to juggle your time between marketing your current book and writing your next book?
Luckily, this is the second book in a three book series. Flying Free, the concluding book comes out in a month. So I feel like I am marketing the first book, Flying Away, while releasing the second and third. But I can also see how having multiple books out works, while having multiple series out begins to be messy. I think by then, it will be time to hire a personal assistant.