Can you give us a brief overview of your latest book? Is it part of a series? 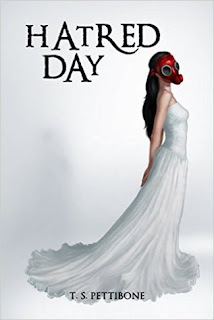 Yes. Hatred Day is the first installment in a seven-book series that we have been planning for the past nine years.

Hatred Day is like a town filled with a hundred different styles of architecture. Readers have told us that they’ve encountered nothing similar. Our story blends science-fiction, fantasy, mystery and romance. To set the stage, we’ll give a few details about the state of the world. In the year 2052, all of humanity is unified against the Inborns, an extraterrestrial species with godlike intelligence and abilities, whose arrival on earth caused an environmental and biological crisis.

The premise of Hatred Day revolves around 18-yeard-old Snofrid, a girl who is part-Japanese and part-Inborn. To save her family from execution, she must take part in a hunt that will determine the fate of two worlds. But she not one of the hunters, she’s the bait.

Did you try the traditional route to publishing, i.e. querying agents/publishers?
Initially, we wanted to be traditionally published. We received six different requests for our full manuscript by the time we had finished querying. While this was both exciting and encouraging, we ultimately chose to go our own way.

What factors influenced your decision to self-publish your book(s)?
Simply put, we wanted complete creative control. Because we have been working on The Hatred Day Series for the past nine years, we wanted to keep our vision as pure as possible—concerning the story’s final draft, the title, the cover, the marketing, etc. Of course, we aren’t against the idea of getting a publisher later down the road. That would be wonderful. But for now, we’re just focusing on finishing the series and marketing the best that we can. Fortunately, things are going well so far. Several BookTubers were kind enough to agree to review Hatred Day, plus Kirkus Reviews awarded Hatred Day the Kirkus Star and chose it as one of Kirkus’ Indie Books of the Month Selection for June. With that said, the books in The Hatred Day Series are the only ones we are looking to self-publish. We will likely query agents with any other unrelated stories.

What is your writing process? Do you listen to music or do you like silence?
Generally, we listen to music, but most genres are too distracting. While writing, we only listen to classical music, instrumentals, and film and videogame soundtracks.

Do you outline your story or just go where your muse takes you?
Before we touch a keyboard, we outline. Our outlining process is detailed, but we do leave room for spontaneity. When we’re in the thick of writing, often times we realize simpler or better ways to execute plot.

Did you hire an editor to review your manuscript before publishing?
We’ve been working with a wonderful Canadian editor for the past three years. When something in our story is lacking, he makes it a point to let us know. No sugarcoating. But that’s exactly why we love working with him. Constructive criticism is generally more useful to us than praise.

Besides Amazon, are there any other sites where your books are for sale?
Yes. Hatred Day is available online at Barnes and Noble. In a few months, it will also be available on iBooks and Nook.

Besides writing, do you have any other passions?
We have both studied art and singing on and off for the past several years. Also, oddly enough, we have a passion for research. Some of our favorite topics are foreign cultures, architecture, history, geography, cars, motorcycles, weapons and martial arts.

What’s next for you?
Currently, we are writing Verdict Day, the second installment in The Hatred Day series. Expected publication is 2017. We are also working on a separate standalone novel in our spare time.

Synopsis:
In the year 2052, it’s not love but hate that unites the world. Humanity is unified against the Inborns, an extraterrestrial species with godlike intelligence and abilities whose arrival on earth caused an environmental and biological crisis.

Enslaved and despised even by her own Inbornkind, 18-year-old Snofrid reawakens to the world after having her memories stolen and is certain of only one thing: she will do anything to ensure her freedom. But her resolution is soon tested when the son of a high-ranking human official is murdered and her home city becomes the center of the interspecies war, one that might see the Inborns purged. Desperate to find a way out of the city for herself and her family, Snofrid risks making a deal with the manipulative Inborn Commander, Hadrian, and his brutal cadre of soldiers. Her task is simple: take part in a historic hunt that will bring wealth and fame to all who survive. Unfortunately, Snofrid’s role is one in which survival is rarely seen—the bait. AUTHOR BIO:
T.S. Pettibone are the authors of The Hatred Day Series. Expected publication for book two, Verdict Day, is 2017.

T.S. Pettibone is the pen name of identical twins, Brittany and Nicole Pettibone. They were born in California, grew up in Kansas, and these days, live and write in California. On the rare occasion that they break from writing, they enjoy taking their dog on night walks, reading books by long deceased authors, drinking too much coffee and tea, traveling the world, making friends out of strangers and trying new things.