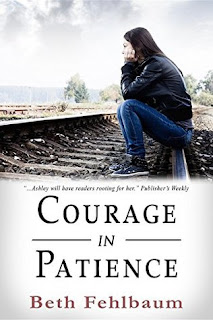 Can you give us a brief overview of your latest book? Is it part of a series?
Truth in Patience, the final book in The Patience Trilogy, finds sixteen-year-old Ashley Asher struggling with wanting to have a boyfriend like other girls are able to do, but struggling with the emotional and mental scars she has as a result of being sexually abused by her stepfather from the age of 8. She is safe now, living with her biological father, David, his wife, Beverly, and their son, Ben, in the small Texas town of Patience, but recovery from             childhood sexual abuse is a long, arduous journey. In addition, her mom comes knocking, wanting Ashley to return to living with her. Ashley must dig deep in order to find her voice.
Do you have a favorite character?
Pre-recovery Ashley is very much me as a child and teen, because I was also sexually abused by my stepfather, and her stepmom, Bev, is my “teacher self.” I love all the supporting characters in Ashley’s life; even the ones who begin as unlovable generally reveal themselves to be flawed because they are human, not because they are truly unlovable.

Have you ever had a minor character evolve into a major one? Did that change the direction of the novel at all?
Many characters actually evolved over the course of The Patience Trilogy, but among the more notable are Marvella and Gabe Brown. Marvella, the Patience High School principal’s secretary, began as a foil for the boneheaded principal and warm-hearted comic relief, but she and her son, Gabriel, who was at one time a member of a White Supremacist organization, play a pivotal part in a major plot point in Truth in Patience.
Did you try the traditional route to publishing, i.e. querying agents/publishers?
I am traditionally published as well as published by small indy presses. My agent is Gina Panettieri of Talcott Notch Literary Services, LLC. My book, Big Fat Disaster, is published by Merit Press/F+W Media. The Patience Trilogy is published by Steady On             Books, a small independent publisher.
How long before you got your offer of representation/your first contract? Was it for your first novel?
I was offered representation by Talcott Notch on my first round of
agent queries for Courage in Patience.

Are you currently under a traditional publishing contract for future books or do you have manuscripts that you will self-publish? Are you doing both?
I have a contract for another book with the publisher of Big Fat Disaster, and I anticipate publishing the non-fiction companion to The Patience Trilogy with Steady On Books, since that makes sense.
What is your writing process? Do you listen to music or do you like silence?
I sometimes work with music—usually Celtic instrumental—but I also playlist my books. Sometimes I prefer silence. It’s unusual for me to be able to concentrate and lose myself in my story if there are a lot of people around. I prewrite in my mind quite a bit then make interlocking webs of characters and what each of them want.

Do you outline your story or just go where your muse takes you?
I wrote Courage in Patience without an outline but it went through dozens of revisions. In my subsequent books, I have outlined at least through the first 100 pages. After that, it’s a matter of knowing where I want to go next and figuring out how to get there.

Did you hire an editor to review your manuscript before publishing?
The fabulous Evelyn Fazio (!) edited The Patience Trilogy. She is phenomenal, insightful, and wonderful to work with!

Tenacious 14-year-old Ashley Asher claws her way back to normalcy after enduring six years of an unimaginable Hell. Uprooted from her negligent and selfish mother, Ashley finds solace in the safety of her father’s home. Building a relationship with her stepmother, she’s finally able to open up and confront the past that haunts her.

With the help of her stepmom, therapist, and a group of troubled adolescents, Ashley battles her demons, struggling to find the normal teenage life she’s always wanted. Can Ashley find the strength and courage to overcome the horrors of her past while fighting for the future she so deserves? 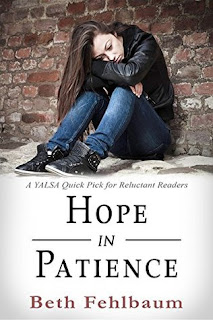 Hope in Patience:
Hope to heal.

Still shattered from the horrific events of her childhood years, 15-year-old Ashley Asher is barely holding it together. Battling her vicious and vile mother who still sees her as the villain and not the victim, Ashley’s stuck in a cycle of self-injury and self-hatred as a result--despite the many people who trying to pull her out of it.

Adolescence is hard, but throw in a new school, a new family, and a father she hardly knows, Ashley's need for self-destruction and pain intensifies. Her new therapist, Dr. Matt, may be unconventional with bizarre antics, but he'll do whatever it takes to pull Ashley out of the doldrums. Ashley just wants a crack at normalcy. But can her counselor and the friends and family who love her teach her that "crazy is the new normal" and that nobody has it easy? 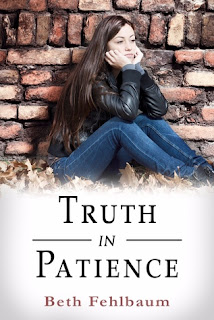 Truth in the past.

Finally adjusting to life in small town Texas, Ashley Asher sees a glimmer of what happiness really is. Even her new relationship with the attentive Joshua Brandt shows promise of a first romance. But Ashley's fear of intimacy after years of unspeakable abuse may cause friction and distance in their relationship.

Determined to prove to her that she's healing, Dr. Matt, her beloved therapist, shows her that "life is messy." And he doesn't know how messy it is about to get. When her mother decides that Ashley belongs back in their hometown with her, Ashley is forced into another family feud that she isn't prepared for. Refusing to leave behind the new life she created in Texas, Ashley and her mother go head-to-head. But can Ashley finally find the courage and strength to battle her demons when her mother might be the biggest demon of all? 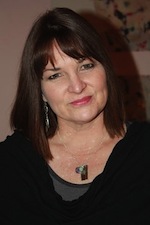 In addition to writing Young Adult Contemporary Fiction, Beth Fehlbaum is a high school English-Language Arts teacher who frequently draws on her experience as an educator to write her books. She has a B.A. in English, Minor in Secondary Education, and an M.Ed. in Reading.

Beth is a member of the RAINN (Rape , Abuse, Incest National Network) Speakers’ Bureau. She has a following in the young adult literature world and also among survivors of sexual abuse because of her work with victims’ advocacy groups.

She has been the keynote speaker at the National Crime Victims’ Week Commemoration Ceremony at the Hall of State in Dallas, Texas and a presenter for Greater Texas Community Partners, where she addressed a group of social workers and foster children on the subject of “Hope.”

She is a survivor of a traumatic childhood, like Ashley in The Patience Trilogy, and the day-to-day manager of an eating disorder much like Colby’s in Big Fat Disaster. These life experiences give her a unique perspective, and she writes her characters’ stories in a way meant to inspire hope.

Beth lives with her family in the woods of East Texas.