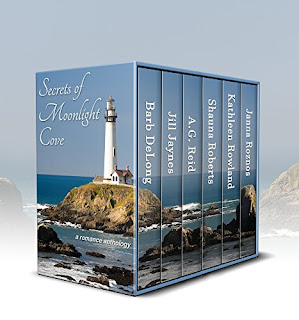 Excerpt from Mr. Valentine Comes to Town by A.G. Reid
The problem with being immortal is that you can’t vacation in the same place very often. Usually, a couple of weeks every decade was all Valentine allowed himself. More than that, and people started asking too many questions. Moonlight Cove. His research told him this location was ideal for his needs. A coastal city with a Mediterranean climate, extended dry summers and short wet winters. The structures, though old, were well maintained. Best of all, Moonlight Cove has a transient tourist population.

Mr. Valentine Comes to Town by A.G. Reid:  A mysterious vacationer—and supernatural entity—Mr. Valentine is matchmaking despite strict instructions from the goddess Venus to leave the people of Moonlight Cove alone.

Maggie’s Mystery Man by Barb DeLong: Who is the reclusive visitor that has rented the entire Bed and Breakfast in the historic Moonlight Cove Lighthouse and who only appears in public in a bad disguise complete with a ridiculous fake wig? Maggie might find the big story that will save her small town paper. Or she might find much more.

Once Upon a Love Letter by Jill Jaynes:  Chloe Reiser sees dead people, and now that she’s back in Moonlight Cove to make a fresh start, she’s done keeping it a secret. But how is she going to tell her more-skeptical-than-ever high school crush that his dead father has an important message for him?

Surprise Deliveries by Shauna Roberts:  Serious, sensible Mr. Hamasaki left for a trip and never came back. His daughter and an artist must team up to find him.

Second Time Around by Janna Roznos:  A woman with her business on the brink may find more than she bargained for in the old Victorian house left to her by her dead sister.

Lily’s Pad by Kathleen Rowland:  Lily Holmes knows enough tricks to attract celebrities to her beachside bistro, Lily’s Pad. She knows the rules but breaks one when she falls in love with her valued client, reality T.V. star Scarlett Royale’s man, Creed Taylor. 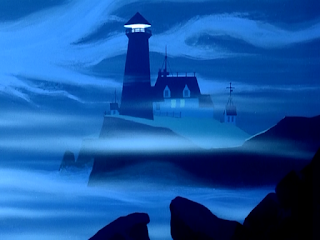 Jill Jaynes began her love affair with romance when she was a teenager growing up in Southern California, spending many a late-night under the covers with a flashlight and good romance novel.  Today she writes stories with happy endings her own way--with a dash of magic that means anything can happen. When she’s not writing, you can find her wine-tasting or hiking with her awesome husband, plotting her next story with her writer-daughter or working at her day job in her spare time.

A.G. Reid developed a love for romance novels while serving in the military. It helped keep him grounded. He now writes romantic stories with a paranormal twist. Enjoy his short story Mr. Valentine Comes to Town in the romance anthology, Secrets Of Moonlight Cove.

Barb DeLong loves all things romance, animals and light-hearted, so she combines the three into her contemporary and paranormal stories. She has published a short story in Romancing the Pages anthology, Secrets of Moonlight Cove anthology, and is currently working on another short story plus a three-book paranormal romance series.

Janna Roznos writes about the middle-ages: middle-aged women that is! Second chances, life changes and starting over are themes she continues to explore in her writing. Her short story, Second Time Around for Secrets of Moonlight Cove is her first published work.

Kathleen Rowland is devoted to giving her readers fast-paced, high-stakes suspense with a sizzling love story sure to melt their hearts.  Some are sweet: Lily’s Pad within the Secrets of Moonlight Cove anthology, but a sizzling hot example is Deadly Alliance from Tirgearr Publishing.