#Excerpt: GAWAIN AND THE GREEN NIGHT by Stefan Emunds 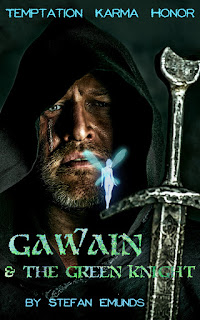 His brain is on fire.

He shakes his head but stops at once. It feels as if his brain is loose and banging against the inside of his skull.

“Swyve!”
He pushes his forehead against a cold rock.

Fifty yards away a river whirls fire, water, and stones into the air. It’s a ferocious, elemental wall, ready to obliterate anything that gets too close. The deafening clamor pumps up the pain in his head.

His tongue is a lump of hot sand, his body limp as if bled out, prostrated on a rock. He summons a prayer and rolls over. A vast, flat stone desert boasts there. On the horizon soars a violet, oval mountain of perfect proportions. Raindrops are floating in the air.

“This is no common land. How did I end up here?”

A few meters away a horse snorts, weary, feeble, and twisted like him. From its mouth leaks thick, green saliva.

He worms his way to the horse and leans against it. The horse’s skin shivers and it moans with appreciation. The horses sweat smells like urine. He pats the horse, swipes through the air and wets his hand, then his forehead.

He does the same for the horse.

“What happened to us?” An inky fog clouds his mind. He fumbles for his memories like a blind man who lost his stick and dog. Nothing. His spirit implodes into the void of his mind.

“My God, who am I?” He shakes his head again, this time he ignores the painful throbbing.

“Did the poison take my memory?”

He looks down at his body. It is glowing with a mysterious, amber light. “Am I a ghost? Did I die?”

He pinches himself and welcomes the pain.

A knight goes out of his way and seeks his execution on his own free will in the hope people will remember him as the embodiment of honor.

Sir Gawain serves as the most honorable knight at King Arthur’s Round Table, and after an encounter with the mysterious Green Knight, Gawain’s fate becomes intertwined with that of his own honorable death - a destiny he must fight for to the bitter end. After accepting a beheading challenge from the Green Knight, Sir Gawain is awestruck to find the knight quite alive, despite his mortal wound.

In the year that follows, Gawain strikes out across the land in search of the green chapel, just one link in the chain of a perplexing and ancient mystery behind the Green Knight, and the circumstances of Gawain’s voluntary execution. Along the way, Gawain’s strength, duty, and honor will be tested as he fights through treacherous trials and carnal temptations. Trapped in a terminal karmic scenario, and honor-bound to seek out his own death, Gawain leaps into the ethos of mythology as a hero of legend.

A classic retelling of the story of Gawain and the Green Knight, this story of karma and honor brings the legend back to life as a mystical romance and epic adventure tale that will whisk you away to an era of chivalry, honor, and divine purpose. 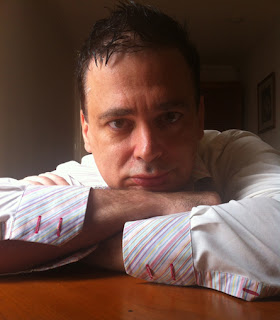 Stefan loves to write spiritual, visionary, and inspirational fiction and non fiction. He was born in Germany and enjoyed two years backpacking in Australia, New Zealand, and South-East Asia in his early twenties.

Although drawn to philosophy and spirituality since adolescence, Stefan chose a career in the telecommunication industry. Since then, he has worked as a business development manager in Europe, Middle East, and in South East Asia.

2012 Stefan kick-started his author hobby career. He writes about the mysteries of life and beyond and likes to tickle people’s spiritual bone. He has set his heart on promoting a contemporary, spiritual Christianity too. Of course, he also writes to entertain. Spirituality is fun.

When Stefan isn’t writing, he spends his time with his children and works on his spiritual career, in the hope to meet God face to face in this lifetime.

The tour dates can be found here: http://goddessfishpromotions.blogspot.com/2016/12/blurb-blitz-gawain-and-green-knight-by.html