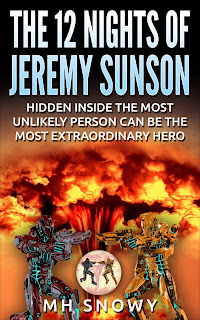 I wasn't sure what to expect when I first started reading this book, but although it's only 80 pages long, it's packed with intrigue, suspense, vulnerability and a very likeable hero. Jeremy Sunson is an accountant who is convinced by his shrink that his dreams are just that--dreams, not real life. Jeremy finds it hard to believe that he's dreaming or that he's depressed when he witnesses the total destruction of his apartment by two robotic-like assassins each night. The fact that each morning, his apartment appears undamaged in any way, makes him begin to believe that maybe his shrink is right after all.

There is so much packed into this little novella and I read it in one sitting. The author has written a fun and witty story and it kept my interest until the end. I was sad to see it end, I was enjoying it so much.

If you're looking for a story to immerse yourself in for a little while, "The 12 Nights of Jeremy Sunson" is one that won't disappoint.

Jeremy Sunson is surrounded by crazy. Mrs Abercrombie, upstairs, is widowed because her husband glued feathers to his arms, jumped off the building and tried to fly. His neighbour, Strykland, has gone mad since his wife died in a freak car accident—his only thread to reality the doomsday machine he’s building and his daughter … and, of course, spacemen invade Jeremy’s living room.

Every night, in glorious Technicolour, there’s a battle royal between two high-tech assassins who continually blast Jeremy’s apartment to shreds. Each man has one mission: Red wants to kill Jeremy, Bronze wants to save him!

Though his therapist insists he’s just having bad dreams—Jeremy knows better. It’s time to fight. He’s sick and tired of being sick, scared and tired! Armed with rare confidence and a baseball bat, this night, Jeremy fights like the crazy man he isn’t!

The 12 Nights of Jeremy Sunson—ride a wave of laughter, fun, and sci-fi fantasy all the way to Armageddon!

Melindra Hattfield Snowy, a part-time writer and full-time dreamer, who of course prefers to be known as MH. She is the author of In Harm's Way, the first novella in Harm's story published by Pygaso Productions, described as epic fantasy meets The Truman Show.
MH has also penned several short stories including We Three Laws of Robotics Are and The Secret Invasion of George Kranskii which explains how road rage is result the result of an alien invasion.