#SALE .99 DARE TO LOVE A SPY by Debra Elizabeth 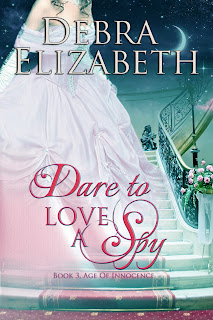 Miss Hannah Richardson is enjoying a Season in London. She's not looking for a husband, at least not this Season. She wants to enjoy herself before settling down to married life. All that changes, however, when she sees the Duke of Wetherby. He's tall, dark and impossibly handsome and someone Hannah wants to get to know better.


Camden Darkin, the Duke of Wetherby, is not fond of attending soirees, dinners or balls, but his latest mission for the Crown demands he mingle with the ton. He has vowed not to marry because of his dangerous work and the constant bevy of beauties anxious mothers throw into his path is not tempting him in the least. That is, until he meets Hannah Richardson, a young woman unlike any other he's ever met. Can he learn to love or will his hardened heart rob him of the very thing he needs the most.


BUY LINKS:
Amazon:
https://www.amazon.com/Dare-Love-Spy-Book-Innocence-ebook/dp/B01IWR62CW/ref=twoen-20
BN: http://www.barnesandnoble.com/w/dare-to-love-a-spy-debra-elizabeth/1124272446
KOBO: https://www.kobo.com/us/en/ebook/dare-to-love-a-spy
Reviewer’s comments:
"I loved the murder-mystery flair that seemed present and the deliciously tense undertone of the spy network. These points gave lots of flavor to the budding romance and caused lots of conflict well so we ended up with a really meaty story"

"A very well-written book, I highly recommend it for those who love a witty, fast-paced Regency romance."

Other books in the Age of Innocence series: 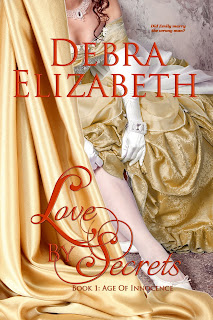 Eighteen-year-old Emily Stanton is excited to attend this season's society balls and begin her search for a husband. She is thrilled when the dashing and handsome Connor Preston begins to show her more attention. After each ball, Emily finds a love note in her drawstring reticule, and she expects a marriage proposal from Connor any day.

When her father objects and forces Emily to accept the proposal from Lady Tisbury's shy nephew, Ethan Richardson instead, her heart is broken. How can she love her new husband when her heart belongs to the man who wrote her such beautiful love letters?

"As a fan of the incredible Jane Austen ... this novella was a real treat for me to read. The author does a wonderful job with descriptions, such as when she describes Emily's first ball as a kaleidoscope of colors as the couples dance the night away."

"Love by Secrets is a sweet, bite-size love story. ... I really liked the time period the book was set in. It reminded me of Pride & Prejudice in that regard."

"The story was captivating, truly well-written.....Overall, Love by Secrets was an enjoyable, quick read. The author did a good job in conveying all the right elements of a sweet historical romance and I look forward to continuing the series, as well as read her other works. I recommend giving this one a try”. 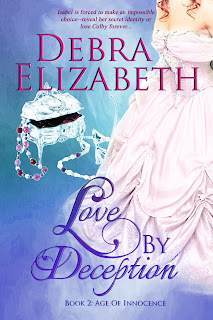 LOVE BY DECEPTION, Book 2
Content with her life as a lady's maid, Isabel Knott learns the father she never knew has left her a fortune. The news comes with one restriction--she can never reveal his name. Isabel falls in love with Colby Tisbury, but with her nonexistent pedigree his father, Lord Tisbury, will never accept her as his daughter-in-law.

Colby Tisbury must marry, and soon. If he doesn't find a bride before the end of the Season, his father will supply one. Then Colby meets sassy Isabel Knott, and everything changes--but can he go against his father's wishes and marry a girl utterly lacking in family and connections? Isabel is forced to make an impossible choice - reveal her secret identity and bring shame to her true father or lose Colby forever.
Amazon buy link:
http://www.amazon.com/Love-Deception-Age-Innocence-ebook/dp/B00G4DSLYO/ref=twoen-20

Kobo: https://www.kobo.com/us/en/ebook/love-by-deception-book-2-age-of-innocence-a-historical-romance
Reviewers Comments:
"If you enjoy historical romance, or have ever dreamed of a Season in London, don't miss this lovely story."

"There is a shocker or two in store when it comes to Isabel. Twists in the story that I never saw coming. Another fun read and great follow-up to its predecessor"