#Review: THE CHASE by Sara Portman 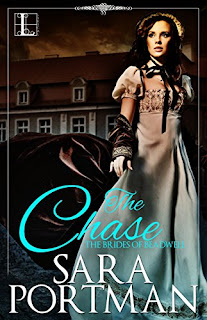 I thoroughly enjoy Ms. Portman's books and "The Chase" does not disappoint. Michael Rosevear was born on the wrong side of the blanket and even though he is a recognized son, he is not close to his father. He manages a distant estate in Yorkshire, but must make his way to London when he is summoned by his father who has found a bride for him. If Michael wants the estate to finally be his, he must do as he is told. Juliana Crawford is running away from an abusive father and begs a ride to London from Michael even though it is most inappropriate for a young woman to do so. The mystery surrounding the young woman is more than Michael can let go.

Ms. Portman has a flair for teasing out the backgrounds for both Michael and Juliana. The growing attraction between these two was well-done and their romance was believable. The twists and turns in the book kept me turning the pages to the end. I only have a slight criticism in that I would have liked more of Michael and Juliana in the epilogue instead of Beadwell women. That chapter seemed a bit out of place in the story, but it was still a satisfying ending to the story.