#Review: ENCHANTED BY THE HIGHLANDER by Lecia Cornwall 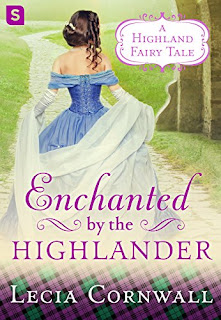 I've read the other books in the series and this story was about Gillian MacLeod, the shy one, or so her family thinks. Being surrounded by 11 other boisterous sisters, Gillian finds it easier to keep quiet than to try and compete against their voices. When her father arranges a marriage for her with an older Scotsman, he thinks he's doing what she wants, but he never consults her about it. Gillian has her own ideas about the man she wants to marry and it's Englishman John Erly who she kissed during a masquerade ball. He's to accompany her to Edinburgh for her wedding and it gives them more time to get to know each other. Can they prevail against all odds or will Gillian's opinionated family decide her fate?

This was a sweet story although I would have liked to have Gillian speak up a few times during the story and not just at the end. Ms. Cornwall gave the reader a glimpse into both Gillian's and John's thoughts and witness their growing attachment to each other. I did enjoy seeing Gillian finally asserting herself and was eagerly turning the pages to see how it ended. Fans of Scottish romances will certainly enjoy this book.