#Review: A DUKE IN THE NIGHT by Kelly Bowen 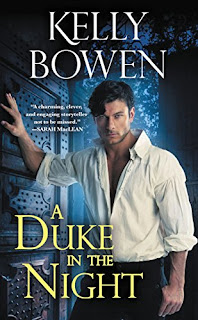 3.5 stars of 5 stars
August Faulkner, Duke of Holloway, learned how harsh life can be when he was young and his father was thrown into debtors prison. It was a lesson he would never forget and he has forged ahead with securing a financial future for himself and his sister Anne. August has a knack of buying run down businesses, reorganizing them and making them profitable. Because of his past, he never has enough and has a ruthless reputation when it comes to business. With so much success behind him, he harbors one regret in letting Miss Clara Hayward slip through his fingers in his youth. When Anne enrolls in Haverhall School's summer program, August comes face to face with his greatest regret.

While I enjoyed this story and it kept my interest throughout, I thought Clara was more of a modern heroine instead of a young woman in Regency England. Her ideas of what young ladies should or shouldn't do would have not been very well received among the ton. I also did not understand why Clara was labelled a wallflower in her youth. There was one scene in a ballroom when she meets August, but in another scene her parent's parties were the "it" place to secure an invitation to. There was a slight twist in the book that didn't really surprise me and there are also a few plot questions left unanswered. While this wasn't my favorite story, I do enjoy Ms. Bowen's writing so I'll definitely be reading more of her books.

This book is expected to be published on February 20, 2018. I received a copy of this book in exchange for a fair and honest review.
Posted by Debra L Martin at 6:00 PM