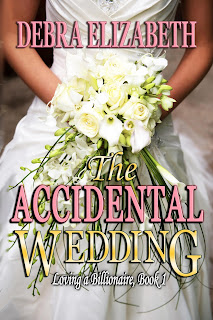 Blurb:
Has Keira made the worst mistake of her life?

Unemployed Keira Callahan decides to try her luck at the casino before delving back into job hunting. As she walks through the casino, she bumps into the most handsome man she’s ever seen. When he asks her to dinner, she doesn’t hesitate. As she learns Cade Tyndale’s story—he needs to wed or lose his British estate, her impulsive nature rears up and she agrees to marry him and move to England for one year. What does she have to lose except her heart to the impossibly handsome Earl of Barrett?

Excerpt:
“Congratulations!” the woman sitting next to her said. “Tonight’s your lucky night.”
“Thank you. I was just about to leave," Keira said. "That was my last spin.”
“Good thing you didn’t leave.”
“I know, but I’m definitely leaving now. They’re not getting any of this money back,” she said with a chuckle. By the time the credits finally stopped adding up, she had won a little over a thousand dollars. “This is the biggest jackpot I’ve ever won,” she said, grabbing her ticket as it slid out of the payout slot. She turned to the woman next to her. “Good luck tonight. I hope you win too!”
The woman nodded her thanks and turned back to playing her own machine.
Keira looked around for the nearest cashier window, spotted one past the roulette and craps tables, and hurried toward it. As she passed the craps table, she looked at her ticket again, with its final payout of one thousand and seventy-five dollars. It was the most money she’d ever won at the casino. Tonight was indeed her lucky night. This money would certainly give her some added time while she made up her mind about what she wanted to do next about finding a job. Still looking down at her ticket, she nearly fell to the floor when she ran into something rock hard. Or make that someone. As she began to fall backward, her arms doing wild cartwheels to try to regain her balance, her eyes found the most gorgeous man she’d ever seen standing in front of her.
He was tall and lean, with striking blue eyes and light-brown hair that fell in waves to his shirt collar. Women would kill for hair like that, it was so perfect. He looked like he’d stepped out of a GQ magazine cover; or better still, put him in a suit of armor and give him a sword, and he would become the legendary knight Tristan come to life. A hero destined to make the ladies swoon, and Keira was ready to swoon. He was impossibly handsome.
All these crazy thoughts swirled through her mind as she fell backwards. This tumble was going to be so embarrassing, never mind the bruising her bottom would endure. Much to her surprise, none of that happened. A strong arm wrapped around her waist at the last minute and prevented her from falling. Instead of sitting on the floor embarrassed, she found herself pressed against a hard and very toned chest.
“Oh, my God! I’m so sorry,” she blurted out. “I wasn’t looking where I was going.”
Blue eyes twinkled at her. “The fault is mine. I stepped back from the table without looking. Please accept my sincere apology,” the handsome stranger said in a charming English accent before releasing his grip on her waist.
Could he be any more perfect? Not only was he Adonis, the god of beauty and desire, in the flesh, but an Adonis with an English accent. Her mouth hung open as she stared at him.
Behind them, cheers broke out. Were they cheering for him? Keira looked around and saw the stickman place a stack of chips in front of her hero stranger. “Wow. Looks like you won,” she said.
“Well, then I have you to thank for that. Seems like you’re the good luck charm I’ve been looking for all evening,” he said. “Would you care to stay a little longer?”
Stay a little longer? Keira wanted nothing more than to stay in his company. She had a weakness for British accents, never mind the fact that he was incredibly handsome with full sensuous lips. Besides, she wasn’t in a hurry to go anywhere else. Putting her winning ticket in her purse, she nodded. “Sure, why not. Thank you for catching me, by the way. I wasn’t really looking forward to bouncing off the carpet in front of a crowd. That would have been embarrassing.”
The sexy stranger chuckled. “Not a problem. Anytime you feel yourself falling, I’d be happy to catch you again.”
A shiver of delight snaked up Keira’s spine. An Englishman with a sense of humor—how delightful was that? This evening was getting better and better—first a win at the slot machines, and now a meeting with a chivalrous and handsome stranger. Yes, her night was definitely looking up. “I’m Keira. Keira Callahan.”
“Pleased to meet you, Keira Callahan.” He extended his hand. “Cade Tyndale, at your service.”
Keira shook his hand. It was warm, and she wondered what that hand would feel like caressing her skin.
What? Caressing my skin? Where did that thought come from? Pull it back, girl. You just met him. Stop daydreaming and focus on the now.