#Review: SIX WEEKS WITH A LORD by Eve Pendle 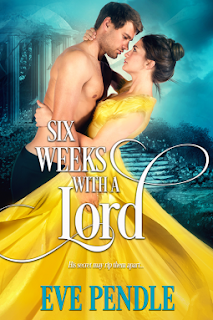 Earl of Westbury, Everett Hetherington, needs a wealthy wife to pay off the debts of his late father and brother and Grace Alnott needs to marry an aristocrat if she wants access to her dowry. These two strike a bargain--Grace will give Everett half of her dowry if he agrees to a marriage in name only. When Everett agrees, Grace feels she's on the right path to petitioning the court for the custody of her little brother from the abusive Lord Raynor although she fails to tell Everett what she's doing. Everett needs the other half of Grace's dowry to save the earldom and he sets out to seduce his in-name-only wife.

This plot device has been used many times, but I liked the twist Ms. Pendle used. Grace was hurt by a lord when she was younger and she has mistrust for them all. I really liked Everett. He was kind and compassionate and tried so hard to live within the boundaries of their bargain. The chemistry between  Grace and Everett built slowly over the six weeks, but a misunderstanding could threaten their growing passion for each other. This book is a quick read and fans of regency romance should enjoy it.

I received a copy of this book in exchange for a fair and honest review and I was not obligated to review this book.
Posted by Debra L Martin at 8:00 AM