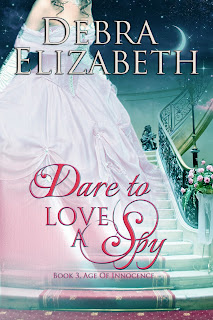 Camden’s gaze swept over Hannah Richardson, watching the gentle sway of her hips as she walked away. He could see she had a small waist, and just for a moment, he wondered what other delights he’d find under all that silk. She had surprised him with her directness, especially in one so young. He admired her spirit and wondered how she would feel in his arms while he kissed her sweet lips, but he knew that was impossible, especially in his line of work. She was someone he would court, but he would not allow himself that privilege; it was too dangerous. It was best not to become attached to anyone, although the thought of Hannah pressed against him sent a pang of longing and need through his core. It had been far too long since he’d enjoyed the pleasures of a woman. “A delightful young lady,” he said, turning toward Mary. “A bit forward for her first Season though. I would not put it past some of the ton to label her that or worse yet, loose if they overhear her.”
“She’s a handful, Camden,” Mary said, expelling a sigh. “Why do you think I’m hosting her this Season instead of her parents? They had wanted her to wait another year to curb her wild streak, but Hannah can be relentless when she wants something.”
“I’m sure you have the matter quite in hand, but there is something else I need to discuss with you, most especially without anyone else overhearing us.”
Mary nodded. “Of course, walk with me to the refreshment table, and we’ll find a quiet corner in which to speak.”
Camden extended his arm and escorted her around the dancing couples. With glasses of punch in hand, Mary nodded to the far corner.
When they took their seats at the small table, Mary raised her fan and whispered, “What is so urgent that you must relay the information here? This is most unexpected. I like it not.”
“I’m sorry for talking about this at your dinner party, but it’s terrible news I bring you. I would not have intruded on you otherwise.”
A look of alarm passed over Mary’s face. “What news?”
“White Knight is gone.” Camden watched as Mary digested the news.
She fanned herself furiously and blinked back the tears welling in her eyes. When she was able to compose herself, she asked, “When did it happen, and do we know who did this?”
Camden shook his head. “His body was found down at the docks a few hours ago, and I’m afraid there are no clues at the moment. It’s a mystery why he would be down at the docks at all. I swear to you that I will find his killer. He will not get away with this horrendous act. He had to have been very clever indeed to take down White Knight.”
“Are you sure it was a he?”
He paused at her question. Could that be how White Knight had been compromised? “Mary, you might be on to something. How else could he have been found out and attacked? He was far too careful to have been fooled so easily.”
Mary took a sip of her punch. “He wouldn’t be the first man to be undone by a pretty woman. It’s a possibility, that is all I’m suggesting.”

~~~~~~~~~~~~~~~~~~~~~~~~~~~
Blurb:
Miss Hannah Richardson is enjoying a Season in London. She's not looking for a husband, at least not this Season. She wants to enjoy herself before settling down to married life. All that changes, however, when she sees the Duke of Wetherby. He's tall, dark and impossibly handsome and someone Hannah wants to get to know better.

Camden Darkin, the Duke of Wetherby, is not fond of attending soirees, dinners or balls, but his latest mission for the Crown demands he mingle with the ton. He has vowed not to marry because of his dangerous work and the constant bevy of beauties anxious mothers throw into his path is not tempting him in the least. That is, until he meets Hannah Richardson, a young woman unlike any other he's ever met. Can he learn to love or will his hardened heart rob him of the very thing he needs the most?

5 stars "I loved the murder-mystery flair thatseemed present and the deliciously tense undertone of the spy network.These points gave lots of flavor to the budding romance and caused lotsof conflict well so we ended up with a really meaty story" Unabridged Andra

4 stars "A very well-written book, I highly recommend it for those who love a witty, fast-paced Regency romance." Notes from a Romantic Heart

5 stars "Besides the strong love story plot there is also a murder mystery plot. I love a good love story, but a murder mystery just added another level and dimension to the story - plus an extra star in this review." Ally, Goodreads reader

5 stars "All in all, Dare to Love a Spy is a charming love story with an intriguing mystery to boot, and I recommend it to any fans of historical romance." Anna, Goodreads reader

4 stars "This story pulled me in from the first digital page and I carried my Kindle all over the house, reading while I cooked, baked cookies, and fed my toddler!" Dawn, Goodreads reader