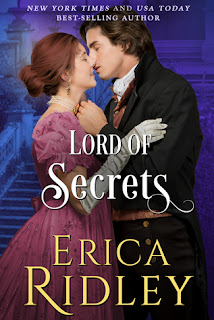 I've read several of Ms. Ridley's books and was looking forward to another good read. Unfortunately, this one wasn't one of my favorites. Miss Eleanora (Nora) Winfield is summoned to London to be a companion to her cousin who has broken her leg. While there, she unwittingly becomes the latest gossip when one of her drawings was sent to a publisher by her brother with the condition that Nora's name not be mentioned. As more of her scandalous caricatures are published, Nora becomes more nervous that her secret identity will be revealed. Mr. Heath Grenville has been hired by Nora's aunt to uncover the identity of the artist. This sets up the angst throughout the book.

I was not a fan of the content waxing back and forth from Nora about how she could never belong in Heath's world and him doing the same thing. This was mentioned in almost every chapter and it got old really fast. I understood the ramifications of any relationship between these two as being impossible without it being mentioned constantly. I also thought the ending was anti-climatic. It was resolved in a few paragraphs after the big secret was revealed. It just didn't seem to do the story justice.

While I loved reading more about the Grenville's, this book fell short of the other ones in the series. That's not to say that I won't be reading more of Ms. Ridley's stories.

I received a copy of this book in exchange for a fair and honest review and was not obligated to leave a review.
Posted by Debra L Martin at 8:00 AM