#Review: DRAWN TO THE MARQUESS by Bronwen Evans 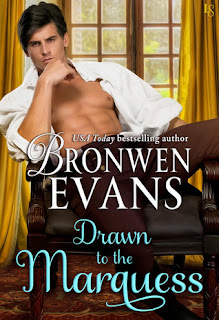 4 of 5 stars
I'm a fan of Ms. Evans and was so excited to read this book. Stephen Hornsby, Marquess of Clevedon, is the epitome of a perfect man's beauty, but just because his outer shell is perfection doesn't mean he's not without flaws. His flaw is a big one--he's slowly going blind. He has tried to "see" everything beautiful before he loses his sight completely. He also carries around a lot of guilt from the war when his best friend was captured by the Turks. If he'd seen the enemy, Alex would never have been captured.

Lady Penelope is another flawed character and though she is beautiful, she has trust issues. When her brother-in-law accuses her of having a hand in her husband's death, she needs a champion and chooses Stephen, but she doesn't tell him the full truth. Both have secrets and that is a big problem throughout the book. Can these two overcome their trust issues and work together to shut down a horrendous smuggling ring?

I really enjoyed this book. Flawed characters are so much more interesting to read about especially watching how each of them learned to trust again. Regency romance fans will definitely enjoy this book.

I received a copy of this book in exchange for a fair and honest review.
Posted by Debra L Martin at 8:00 AM