#Review: THE DUKE OF DESIRE by Jess Michaels 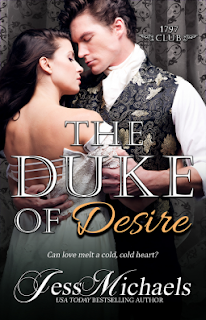 5 of 5 stars
This is the first book I've read in the series and I enjoyed so much I'll be going back to the beginning to read all the books in the 1797 Club series. In this book, Katherine, the Countess of Gainsworth, wants nothing more than to be accepted back into Society after her husbands shocking death and to lead a quiet life. Unfortunately, scandal has followed her and there's nothing she can do about it. When the Duke of Roseford pursues her, Katherine pushes back against even being in the same room with him. After all, it was Roseford who ruined her life when she was an innocent.

Ms. Michaels has a talent for creating characters that are complicated and likable all at the same time. I felt for both Robert and Katherine as they became closer and began to share their secrets. Both of them had hard a time in their early lives and it has shaped the people they are today. The attraction that grows between them is believable and I was routing for them to find the happiness so long denied them. Fans of regency romance will definitely enjoy this book.

I received a copy of this book in exchange for a fair and honest review and was not obligated to leave a review.