#Review: ONCE A SCOUNDREL by Mary Jo Putney 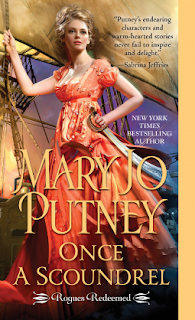 I enjoyed the adventure of this book. Lady Aurora 'Rory' Lawrence and her cousin Constance are out on their own seeing the world. The premise is a bit far fetched for a gently-bred lady of 1815 and the fact that her parents and brother allowed her such independence didn't seem to fit into the times. The adventure ends when Rory's ship and everyone on board is taken prisoner by pirates. Captain Gabriel Hawkins is hired to rescue them. Hawkins carries his own baggage when he was kicked out of the Navy and disowned by his grandfather. This sets up a grand adventure when Gabriel makes a deal to carry the pirate Malek and entourage to Constantinople.

The action in the story kept the plot moving forward and especially liked Gabriel. His courage and honor shines bright. I found Rory a little annoying when she doesn't seem to understand the consequences of being sold into a harem. The romance between these two seemed a little rushed. However, I really liked the secondary romance budding between Constance and Jason. Fans of adventure and romance will enjoy this book.

I received a copy of this book in exchange for a fair and honest review and was not obligated to leave a review.