Interview with KJ Moullens, THE TELLING 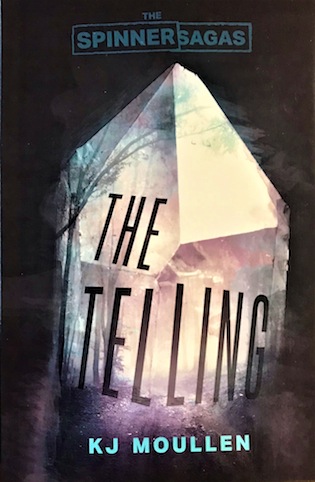 Can you give us a brief overview of your latest book? Is it part of a series?
The Spinner Sagas: The Telling is book one in a planned three book series. The story revolves around a sixteen year girl named Blaine, who felt as if she has never quite fit in. After some strange occurrences Blaine’s mother reveals that they aren’t from Earth but from another world called Renault. Things quickly escalate when Blaine is transported to the mysterious and magical world of Renault. Alone there, she meets a boy who seems to have more knowledge then he’s willing to share. As their journey continues, not only does she learn of her true gifts but of her family’s dark past. She faces the possibility of being the prophesied Bringer of light, who is destined to battle a growing evil that threatens the universe. Her mounting fears and uncertainty of who she is must be conquered for her to discover her true pathway in life.

If you used a graphic designer/publisher’s designer, how involved were you during the creative process for your cover?
I used my publisher’s design team. I was very involved in the creative process. I had a very specific feel I wanted readers to experience when looking at the cover. They were very patient and helpful when I was trying to convey my ideas into reality.

What is your writing process? Do you listen to music or do you like silence?
I write everything by hand then transfer it on to my computer. I find it easier to be creative old school with pen and paper. I listen to music when I create. I have a writing playlist consisting of classical and instrumental songs.

Do you outline your story or just go where your muse takes you?
I’m defiantly a goes with the flow of where the story idea leads me type of writer. When I am working on a specific story, I’m constantly going over things in my mind about characters, conversations and storylines. As the characters develop I find that they defiantly take on a life of their own. Often times the story goes in places I had not originally planned and I find it kind of refreshing to be led by inspiration.

Did you hire an editor to review your manuscript before publishing?
My initial editing was done by my mother who is very well versed in grammar, spelling and punctuation.  We did several rounds of that between the two us. I did pay an outside editor to do a final edit and spell check. It is amazing how no matter how many times you read something over little mistakes are found by someone else.  The more set of eyes that look over your manuscript the better.

Besides Amazon, are there any other sites where your books are for sale?
Yes, you can pick up a copy on-line through Barnes and Noble, Target, Wal-mart and my publishers on line store, Mascot. There are also in a few independent brick and mortar stores that have them available one being The Bosslight Bookstore in Nacogdoches, Texas.

What kinds of marketing ( Twitter, Facebook, blogs, Forums) are you involved in for marketing your book.
I keep a strong presence on Facebook weather its sponsored ads or interacting with my followers of my authors page. I also use Twitter and Goodreads to reach out to new readers and followers. I have found this part of being published being the most overwhelming. My publisher does a minimal amount of marketing for debut authors so the majority has fallen upon my shoulders. It’s defiantly been a journey of discovery.

Do you find it difficult to juggle your time between marketing your current book and writing your next book?
Yes!! 100% yes! I’ve now have set a schedule allotted for both. There’s so much research and information out there for authors to help promote their books, it’s so easy to get sucked down a rabbit hole of information that before I know it Three hours have passed, my head is completely spinning from overload and I just need to take a step back from it all. So I always try to do my writing first then marketing.

Some fun facts about you, which do prefer-
Cats or dogs? Yes.. oh wait you want me to chose one, I love them both, I have 2 dogs and 3 cats
Chocolate or Vanilla? I’m a vanilla girl, White chocolate when I do crave it.
Coffee or Tea? Oh coffee, the sweet nectar of life.
Talk or text? It really depends on what I need to convey. Short conversations and things like that are always in text.
Day or night? I have always been more of a night owl. Mornings and I are not too  fond of each other however since having kids I’ve had to learn to try and play nice.

What’s next for you?
I am currently working on Book two for the Spinner Sagas. I am hoping to have the manuscript finished by the first part of December. And then comes the ever fun part of editing and the publishing process. I have several other projects that I am anxious to get to as well so I foresee a busy next few years.


Sixteen-year-old Blaine was a normal teenage girl. Sure, she moved around a lot, but that wasn’t completely weird, right? Then her mom tells her she’s actually from another dimension called Renault, whose inhabitants can do magic.

Um, what? Suddenly, Blaine is running from an evil she barely understands. Blaine is thrust into the confusing, beautiful, and magical world of Renault with a mysterious boy she just met. There, she begins to discover her own unique abilities and her place in the universe. 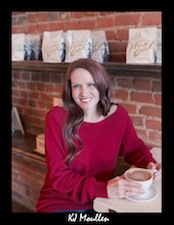 Author Bio:
K.J Moullen started her life as an adventurer. She always loved the outdoors, whether it was playing king of the hill with her pet goat in southern California, playing hockey on the frozen lakes of the Kenai peninsula of Alaska, or snorkeling and surfing off the shores of Maui. Amongst the breathtaking places she lived, her imagination and love for writing knew no limitations, allowing for a lifetime of plotlines and characters to be created and written about. She now shares her life’s adventures with her husband and two children in their home in North Texas.