#Review: THE EARL AND THE RELUCTANT LADY by Robyn DeHart 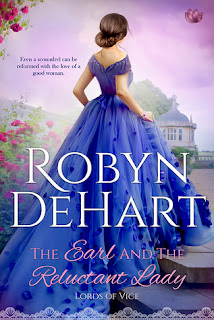 From the moment Fletcher Banks, Earl of Wakefield, sees Miss Agnes Watkins, his stomach does a flip-flop and he's enchanted with her. When he kisses her out in the garden, he's pretty sure, he'll never want another woman for the rest of his life, but life has a way of interfering. It turns out Agnes is his boss's sister and Christopher has forbidden Fletcher from ever touching her again or else he'll lose his position with the home office. With only a courtesy title, Fletcher has no choice but to back away from Agnes. He has no idea that she is captivated with him as well, but his cool behavior toward her in the years that pass convinces her, what she felt when Fletcher kissed her, was only in her mind. Can these two ever work past everything keeping them apart and finally declare their love for each other?

I truly enjoyed this book. Ms. DeHart writes wonderful characters full of heart and soul. There was enough saucy banter back and forth between Fletcher and Agnes throughout the book, but the fact that Agnes does not truly trust him lands her in all kinds of trouble. The plot moved along well, but I thought the villain was kind of dumb in the end. I won't say how because I don't want to spoil the book for any other readers. I'm looking forward to reading the next book in the series. Maybe we'll finally learn the identity of the mysterious Lady X.

I received a copy of this book in exchange for a fair and honest review and was not obligated to leave a review.
Posted by Debra L Martin at 8:00 AM