#Excerpt: ON THE BRINK: A Dystopian Anthology by various authors 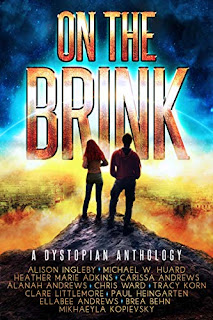 One world. 12 possible futures. Get your copy of this limited edition collection of dystopian and post-apocalyptic fiction today!

From the ashes of the world that was, a new dystopia will emerge...

Join our gritty heroines and courageous heroes as they battle for freedom. Their societies are divided by politics and technology, devastated by war, climate change, toxins, and plague.

Fighting for the future will mean conquering their pasts, but not everyone is who they seem. In these futuristic worlds, every day is a fight for survival.

Discover 12 page-turning stories from bestselling and award-winning dystopian authors that will leave you shocked, fascinated, and entertained.

Will hope prevail? Or is the darkness just too strong?

From “Revelation: A Divided Elements origin story”, Mikhaeyla Kopievsky
ONE
It is easy to hate the flashy opulence of the apartments in Precinct 4. Their white bricks seem too pure under the brown Otpor sun, their large balconies and windows ostentatious in flaunting their riverside views. Still, Lira’s gaze lingers on them. She doesn’t have much of an imagination – Earth Elementals are bred to be useful, not creative – but it doesn’t take an Air Elemental’s mind to picture herself living in one of them. It’s not imagination that makes it easy, but desire; simple, pure, burning desire for something she doesn’t have, will never have, but wants nonetheless.
Slowly, she lowers her gaze from the upper-level apartments and turns back to the streetscape beyond. While the riverside apartments no doubt hold lucrative treasures to lift, they are too well-protected – by nearby Infrastructure Protectors, by patrolling Peacekeepers, and by the scores of Elementals that swell in the nearby streets and laneways. The better option is the row of apartments six blocks to the east.
Adjusting her backpack straps and hefting the weight into a more comfortable position, Lira heads south instead. She doesn’t need to case the apartments in nearby Precinct 12; she has been stealing from them since she was a Trainee. And besides, it is too early to return – she has already chanced her arm by hitting the apartments three times in the last week.
She will return to them in a few week’s time. Now, she needs to collect.

***
The narrow bridge over the Syn River leads Lira to the maze of streets and laneways in Precinct 5. The early morning sun seems hotter here, heating the oppressive concrete and steel and amplifying the stench of the nearby canals. She scrubs at the sweat pricking her brow, pushes up the sleeves of her grease-stained shirt and picks up her pace. Ahead, the streets splinter into a smaller maze of alleys and arcades, reminding her of the cracks that creep across the plaster ceiling of her apartment.
“You’re late.”
The voice murmurs to her from the shadows of an empty arcade. Lira slows her pace and steps inside. Yvgeny stands at the far end against the service door of an abandoned nutrient store, his fingers tapping against his thighs in that way of his when he’s anxious or frustrated or both. Yvgeny shares her love of the money, but his nerves don’t handle the risks as well.
Despite his weak constitution, his greedy eyes light up like wallscreens when he sees the next-gen, fully optimised glass screen she pulls from her polyprop satchel.
He reaches for it, but she pulls it back.
“Nuh-uh. I want to renegotiate our deal.”
“No renegotiation,” he says, gaze still firmly pinned to the screen. “We agreed on a two-day wage equivalent.”
Lira pulls the screen in tighter, tucking it under her arm. “For a second-gen, two terabyte model. This demands more respect. And by respect, I mean money.”
“Three-day wage equivalent,” he says, folding his arms.
“Five-day,” she counters.
He scowls, eyes twitching to the laneway beyond. His nerves are getting the better of him; these trade sessions are usually over by now  – every extra minute increases the chances of getting caught. If she were an Air Elemental, Lira would almost see him calculating the probability, weighing up the risk variables and offsetting them against the profits that were destined for his own account. But, as an Earth Elemental, all she sees are his greedy eyes and twitchy hands.
“Fine,” he says, reaching again for the device.
This time she relents, letting him pull the glass screen to his chest.
“But, I want more,” he continues. “If you can get me more, I’ll pay six-day equivalent.”
It is a better offer than she had hoped for. She nods slowly, not trusting her mouth to contain her enthusiasm. Earth Elementals are terrible liars  – all raw honesty with no grasp of subtlety or manipulation. She needn’t have worried  – Water Elementals, with their blinkered, microscopic focus and disinterest in all things social, are just as bad at reading emotional cues.
“Good,” Yvgeny says, stashing the screen away in his own satchel. “Meet me back here next week. And don’t be late.” 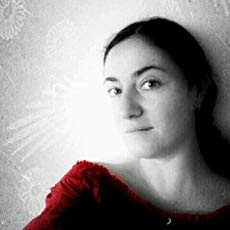 MIKHAEYLA KOPIEVSKY is an independent speculative fiction author who loves writing about complex and flawed characters in stories that explore philosophy, sociology and politics. She holds degrees in International Relations, Journalism, and Environmental Science.  A former counter-terrorism advisor, she has travelled to and worked in Asia, the Middle East and Africa.
​
Mikhaeyla lives in the Hunter Valley, Australia, with her husband and son. Revelation is an origin story in the Divided Elements series. Resistance (Book 1) and Rebellion (Book 2) are available now.